Perspective: ACP Kevin Blake – The Man Behind the Post

Some of the PALAS awardees 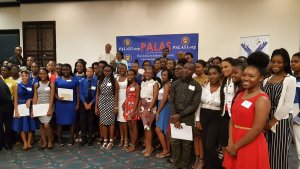 Some of the PALAS awardees

Last Saturday at the Jamaica Pegasus Hotel in Kingston 91 students were awarded scholarships to the tune of over eight million by the Peace and Love Academic Scholarship (PALAS).

Now in its ninth year, founder of the organization Ruel ‘Rula’ Brown said despite the challenges it breaks his heart to know that there are so many needs in Jamaica that he will never be able to fill.

Acknowledging it is just the tip of the iceberg where the scholarships are concerned, he said there are times he breaks down in tears just reading some of the applicants stories.

Keynote speaker at the awards function – chairman of the organization – Patrick Campbell encouraged the applicants not to be afraid to chase their dreams or to embrace new opportunities.

Citing his own life where he spent the greater part of his career at a prestigious law firm in Washington he said when an opportunity presented itself for him to be a part of another prominent law firm in New York he said the emotional decision was hard but he embraced the offer and with it came lessons he shared with the awardees. 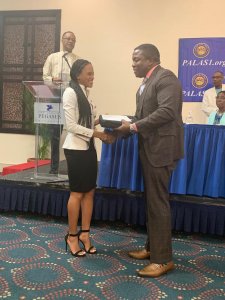 “Always have the courage to pursue change and growth even when you’re unsure of the outcome. We get caught up sometimes in doing things the same way for the sake of doing it. But sometimes a leap of faith can lead you on a successful journey you never anticipated,” he said.

Campbell reminded them that faith means taking risk and doing things that are unpredictable – going about it with courage and hope.

Campbell urged the awardees to get out of their comfort level and challenged themselves. He told them the challenge is to get comfortable with the uncomfortable.

“Change is rarely comfortable, so if you are staying in your comfort zone then there are probably bigger things you can be achieving,” he encouraged.

All the awardees were presented with Digicel credit cards valued at $2,000.

Looking ahead to their 10 anniversary both Campbell and Brown teased that exciting times are ahead.