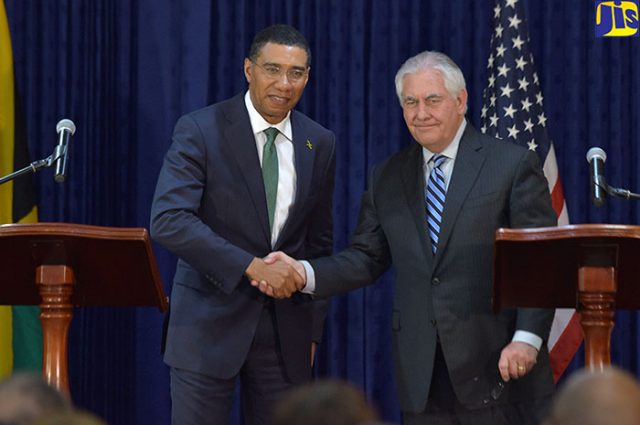 Prime Minister the Most Hon. Andrew Holness (left) and United States Secretary of State, Rex Tillerson, shake hands following a joint press conference at the Office of the Prime Minister today (Feb. 7). Mr. Tillerson was on a one-day working visit to Jamaica.

United States Secretary of State, Rex Tillerson, has lauded the Government for the important progress made in combating lottery scamming and assured of the US Government’s continued support to Jamaica’s security forces and criminal justice system.

Mr. Tillerson said he appreciated the country’s close cooperation with US authorities to extradite suspected lotto scammers to the US and welcomed the establishment of a bilateral lottery scam task force.

He was addressing a joint press conference at the Office of the Prime Minister today (Feb. 7), following bilateral talks with Prime Minister, the Most Hon. Andrew Holness.

The US Secretary of State, who is on a one-day working visit to Jamaica, also noted the Jamaican Government’s commitment to countering narcotics trafficking and transnational criminal organisations.

He said that there are “many opportunities” to enhance cooperation in this regard, “to be even more effective in disrupting these illegal organisations.”

“It is in both of our countries’ interest to work together to investigate crimes, share intelligence, conduct asset seizures where legally and appropriate to do so, and bolster existing anti-corruption and anti-gang programmes,” he pointed out.

In his remarks, Prime Minister Holness expressed gratitude for the “high levels of support” provided by the US to Jamaica over the years, especially in the areas which have assisted in meeting the country’s National Development goals.

“In particular, we have greatly valued America’s efforts to disrupt transnational crime through continued support to effectively patrol Jamaica’s maritime space. We agreed to deepen our cooperation in this regard,” he said.

Jamaica was the final destination in the US Secretary of State’s visit to Latin America and the Caribbean.