US$6.45M GoJ/UN Project to Be Implemented In Kingston and Clarendon. 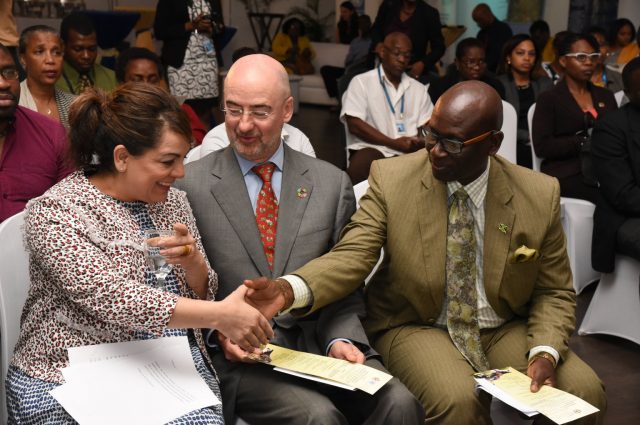 Local Government and Community Development Minister, Hon. Desmond McKenzie (right), greets Chief of the United Nations (UN) Human Security Unit, Mehrnaz Mostafavi (left), during the launch of the US$6.45 million “Strengthening Human Resilience in Northern Clarendon and West Kingston” project at the Spanish Court Hotel, New Kingston on March 12. The three-year project, which aims to improve the welfare of 43,000 residents of Northern Clarendon and West Kingston, will be jointly implemented by the Government, civil society and several UN agencies. At centre is UN Resident Coordinator in Jamaica, Bruno Pouezat.

The standard of living of 43,000 residents of Northern Clarendon and Western Kingston is expected to significantly improve under a US$6.45 million project to be jointly implemented over the next three years by several United Nations (UN) agencies in partnership with the Government of Jamaica and civil society.

The project, dubbed “Strengthening Human Resilience in Northern Clarendon and West Kingston”, is the first such being implemented, and will focus on building resilience in several areas based on extensive assessments of challenges in the targeted communities.

These include: limited access to clean and potable water; the inability to effectively mitigate climate change and natural hazards; persistent poverty; and lack of access to social services, which the UN has identified as foremost threats to the residents’ welfare.

Consequently, the initiative is tailored to strengthen local and community governance bodies, with youth participation being incorporated to design and oversee interventions; and enhance economic, food and nutritional security by creating a climate-resilient agriculture sector and diversified local economy.

It also aims to improve environmental, health and water security to safeguard communities against preventable illnesses such as waterborne and sanitation-related diseases and ensure efficient and sustainable use of natural resources; and strengthen the institutional capacities of the Government and community stakeholders to mainstream the human security approach in Jamaica’s development strategies.

The human security approach, according to the UN General Assembly, underscores the need for protection and empowerment strategies that are people-centred, comprehensive, context-specific and prevention-oriented.

Local Government and Community Development Minister, Hon. Desmond McKenzie, who spoke at the launch at the Spanish Court Hotel, New Kingston on March 12, welcomed the project which he said will significantly benefit the residents.

The Minister said he is particularly pleased that the project will target strengthening of local and community governance bodies, as well as address water issues.

He further noted that the initiative will complement the activities of agencies already working in the targeted communities, to enhance the lives of residents.

“We are looking forward to the elevation of living standards and the enhancement of human dignity…through this joint programme,” Mr. McKenzie said.

“By taking an integrated approach to improve water, sanitation and natural resource management, the programme will create synergies of expertise towards environmentally sustainable livelihoods. At the same time, by addressing the root causes of vulnerabilities, the programme promotes concrete improvements in the daily lives of the (residents),” she said.

Ms. Mostafavi further noted that by linking elements of protection, inclusion and empowerment, the project provides useful insights and mechanisms for combining policy and community-level efforts to realise the outcomes of Vision 2030.

“We are happy to help strengthen efforts to mainstream human security as part of development planning in Jamaica,” she added

Ms.  Mostafavi also expressed the hope that the project will provide practical guidance on how the United Nations system can strengthen its integrated support to disaster-prone communities in their implementation of the Sustainable Development Goals (SDG).

The SDGs are 17 global goals set by the UN which focus on addressing wide-ranging social and economic development issues. These include: poverty, hunger, education, climate change, gender equality, water, sanitation, energy, the environment and social justice.

UN Resident Coordinator in Jamaica, Bruno Pouezat, said in formulating the project, “we (not only) consulted with Government, but also visited communities to listen to their concerns and make sure to incorporate them for action.”

May Pen’s Mayor, Councillor Winston Maragh, also welcomed the project “wholeheartedly”, noting his satisfaction that it will deal with the main challenge of water accessibility.

“We are really grateful for such a project, and we look forward to working with the entire team,” he said.

Funding for the project includes US$2.94 million being provided by the Government and US$1.65 million from the UN bodies through the UN Trust Fund for Human Security.