Usain Bolt, World’s Fastest Man, to Bring Speed and Smarts to Poker in Partnership With PokerStars 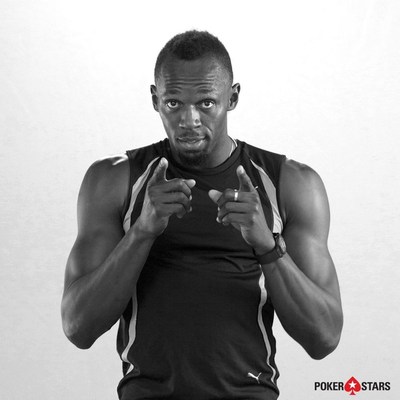 Usain Bolt, World's Fastest Man, to Bring Speed and Smarts to Poker in Partnership With PokerStars

On verge of retiring from track competition, Olympic champ becomes an ambassador for PokerStars

Usain Bolt, record-breaking sprinter and undisputed fastest man on the planet, will promote the game of poker as part of a new partnership with PokerStars, an Amaya Inc. (Nasdaq: AYA; TSX: AYA) brand. Bolt, an eight-time Olympic gold medallist, announced his new partnership via a social media exchange with his friend and Hollywood superstar Kevin Hart, who is currently the most successful comedian in the world and earlier this year signed on with PokerStars declaring he was going to “Make Poker Fun.”

Bolt said: “PokerStars is a winner and I’m happy to join Kevin in helping to bring poker and PokerStars to the masses. It’s a challenging game that’s fun, social and competitive so I’m pleased to be able to introduce it to my fans and to people around the world.”

“Usain Bolt is a fierce competitor who pushes his game to the limits,” Hollreiser said. “But he’s also one of the most-liked athletes in the world. His strong global following and winning personality will help us to introduce poker in a fun, social and fast way.”

PokerStars operates the world’s most popular online poker sites, serving the global poker community. Since it launched in 2001, PokerStars has become the first choice of players all over the world, with more daily tournaments than anywhere else and with the best online security. More than 165 billion hands have been dealt on PokerStars, which is more than any other site.