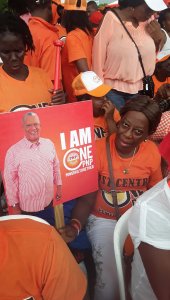 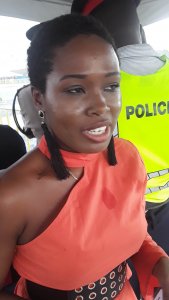 Photo caption: Chantel Howell. Attorney at law spoke to Vision at the National Arena where voting took place.
“The voting was incident free and voter turnout was approximately 90 percent … went very smooth. The level of organization was excellent.”
Ms. C. Howell spoke exclusively to Vision’s SIC Hopeton O’Connor-Dennie at the National Arena at the leadership race.

Both camps in the Dr. Peter Phillips “One PNP” Camp and Mr. Peter M. Bunting “Rise United” team are giving good reports and are both exuding confidence of victory.

MP Julian Robinson has reported that there is a heavy turnout of voters. He did not provide any figures. But at 1PM local time here in Jamaica there was a lull in voting. Lunch and other factors could be responsible for this.

VP Damion Crawford a One PNP supporter said his camp was confident of a Phillips victory by 400 votes. There are approximately 3000 voters on the list of delegates eligible to cast their votes.

Mark Golding a Rise United campaign director said “I do not know which planet those who say their campaign has fizzled” he was reacting to comments made by unknown critics of Rise United team.

Many of Rise delegates were booked into hotels overnight and transported to the voting centre so they voted early yo possibly return to the rural areas. 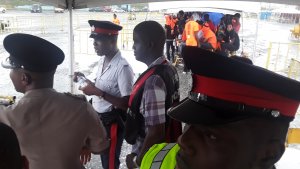 Phillips’ camp said delegates were corralled at Ardenne High School and transported to the National Arena by bus. This is about 2 miles away from voting area.

Conventional wisdom is a heavy turn out favours the challenger who in this race is Peter Bunting. We will see if this holds at about 6 PM local tine when the results are expected.

It is overcast here in Jamaica and slightly drizzling. Will this impact voting?