Kamala Harris being sworn in as VP of the United States

“I place on record the contribution of Caribbean Americans to America. Eric Holder, General Colin Powell to name a few. The inauguration may be a little different this time. Let us get to work. Our country is on a road to healing. Let us get to work building the future.”

Kamala Harris is a noted State prosecutor from California.  Reports are she was tough on crime.  She was professional and obviously had widespread support as a public official.  She then ran and became a State Senator. She did run for the presidency of the United States 2020.  She was not very successful in the Primaries. Today like Biden, she has defied the odds and has been invited by Biden to be his running mate.  Biden, himself a lawyer has no doubt that Kamala is no walk over and has a mind of her own. They did not always agree on all policy issues and likely will never.  They, however,  will find common ground. 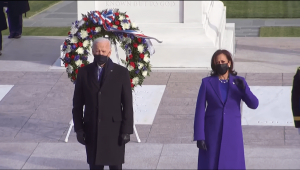 Biden had said that he would select a female as his running mate. So he had made a strategic decision to select a female.  Was he looking for an African American? Or just a female.  Did his choice of a running mate help him to cross over the line and beat Trump by 7 million votes?  We may never know.  People had also grown tired of Trump and the values he stood for.

It was perceived that Trump was not balanced in his leadership style.  Then there was the growth and development of the Black Lives Matter movement (BLM). Former VP Biden, a Democrat, in his wisdom had the vision to read the tea leaves and saw the need to recognize that the status quo was not sustainable. There was a burning desire, a ready market for change. All lives mattered.  He selected a coloured Asian Caribbean to be his running mate. Someone the BLM could identify with. She could later be Vice President in Senator Kamala Harris. Good for you President-Elect Joseph R. Biden.  Your vision and mission are superb.

It is my further perspective that the outgoing one term President Donald Trump has behaved very poorly.  It is indeed shocking that after getting millions of votes and losing by seven (7) million votes 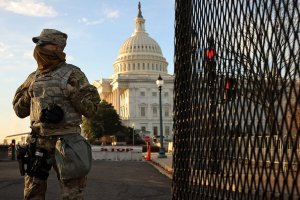 Trump is telling his supporters that the election was stolen from him. It is all so sad. Some forty (40) percent of Americans recently nationally polled,  believe such a lie. This is truly a divided country.  Trump like Hitler knows how to manipulate the minds of gullible people, some of whom support his party and type of warped thinking.

The danger is some of them are currently  members of the National Guard or ex armed service veterans or plain retired military folks who have access to deadly weapons. Ironically!  Some have been  screened out by the FBI and excluded from key inauguration duties for President-Elect Biden/Harris’ swearing in 2021.  They all have a legal right in their,  the American society, and affirmed by their Constitution to bear arms. They have already been highly trained and likely trigger happy.  Trump knows how to manipulate them for evil. They may even wish to see America as a white only state. To make America great again?  Enough said!

“America is crying out for leadership”

She appealed to voters to do so by absentee balloting. Some 161 million voted overall. A record in American history.  Despite false claims of voter fraud. 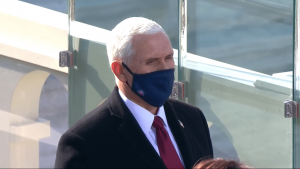 Mike pence at the Inauguration of Joe Biden and Kamala Harris

Mike Pence respected the system and honoured the Constitution.

“We have the power to make a difference.  We need to restore moral leadership to America.”

Kamala Harris VP-ELECT on the verge of her being sworn in at 56, she has indeed arrived. The 49th VP.

Hopeton O’Connor-Dennie is a poet, & veteran journalist who holds the keys to four (4) American Cities. He also has international exposure.