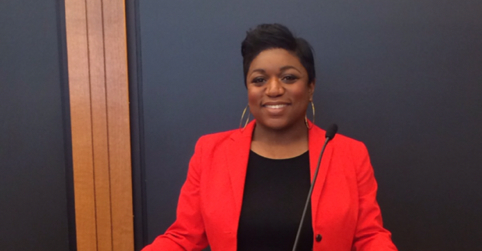 WASHINGTON _ A former hip-hop journalist who became a White House intern in her 30s was named on Thursday as the new White House social secretary.

Deesha Dyer, a Philadelphia native, will oversee planning for everything from the annual Easter Egg Roll attended by tens of thousands of people to opulent state dinners for hundreds, along with numerous receptions, ceremonies and other events that take place daily at 1600 Pennsylvania Ave.

Dyer, 37, started in the social office about two years ago and immediately impressed Michelle Obama with “her passion, creativity, public-mindedness and relentless competence,” the first lady said. “Since then, whether helping flawlessly execute state dinners or going the extra mile to open the White House to people who never dreamed they would walk through these doors, Deesha has worked tirelessly to truly make the White House the ‘People’s House.”’

Dyer succeeds Jeremy Bernard, who plans to leave after a state dinner for Japan scheduled for April 28.

Bernard held the social secretary’s post for more than four years and was the first male in that job in White House history.

Before starting her career in government, Dyer was an assistant at Pennsylvania Real Estate Investment Trust and a freelance journalist covering East Coast hip-hop culture. She also worked with young adults, created a Philadelphia-based hip-hop AIDS program and as a CARE advocacy volunteer, the White House said.

Dyer returned to college at age 29 and earned a degree from the Community College of Philadelphia.

She joined the White House in 2009 as a 31-year-old intern in the office of scheduling and advance. She was brought on full-time a year later, beginning as associate director for scheduling correspondence and working her way up to deputy social secretary in 2013.

At one point, Dyer travelled with President Barack Obama and Mrs. Obama to handle lodging and logistics.