Who is Donald Sangster? 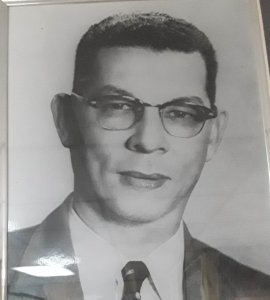 Donald Sangster was a former Jamaica Labour Party (JLP) Prime Minister who took over from Sir Alexander Bustamante who due to failing health retired in 1967. Donald Sangster a Solicitor was sworn in February 1967.

Within a three month period PM Sangster fell ill and was flown to Canada for urgent medical treatment he never survived. Unfortunately his body was flown back to Jamaica as he died undergoing treatment in Canada. He was sworn in 22nd February 1967 and died 3 three months later in office on April 11, 1967.

It was widely rumoured that his death was suspicious. Widely fueled by political opponents and believed by many detractors that Sangster was the victim of a palace coup. This rumour stood for years until it was discovered that he actually died of a brain aneurysm. The rumour severely damaged the image of the JLP.

Despite the damaging and persistent rumour regarding the sudden death of PM Sangster, the election of 1967 was won by the JLP under the Prime Ministership of Hugh Lawson Shearer who became Jamaica’s third PM and the third JLP leader. Shearer was a Trade Unionist and presided over high growth of six (6) and more percent in the Jamaican economy. A growth rate that stood as a record for years.

We salute Sir Donald Sangster as a JLP stalwart and regret his sudden death. We are glad the damaging effects of unfounded rumours that he was poisoned by colleagues as part of a conspiracy or power struggle coup was proven to be false. In those days aneurysms were rare as medical technology was not as advanced as today.

Hopeton O’Connor-Dennie has been watching Jamaican politics for 50 years. He is also Senior International Correspondent for Vision Newspaper Canada.