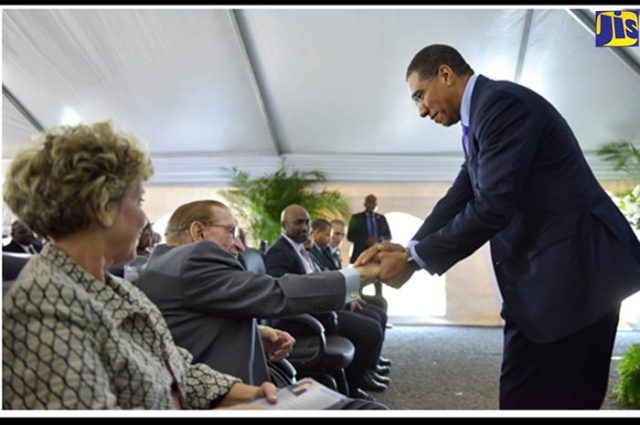 Prime Minister, the Most Hon. Andrew Holness (right), greets former Prime Minister, the Most Hon. Edward Seaga (second left), when he arrived at the Marcus Garvey Drive corporate offices of Petrojam Limited on Thursday (February 22) to participate in a ceremony to officially name the building in honour of Mr.Seaga. At left is Mr. Seaga’s wife, Carla; and at third left is the Minister of Science, Energy and Technology, Dr. the Hon Andrew Wheatley.

Prime Minister, the Most Hon. Andrew Holness, says the Administration is working to incorporate more sources of renewable energy into the country’s supply as it seeks to ensure greater energy security.

The Prime Minister noted that the Government has taken a deliberate approach to diversifying Jamaica’s energy source, and is working assiduously to ensure that renewables, particularly wind and solar, play a greater part in Jamaica’s energy mix.

He added that there has also been a significant increase in the use of liquefied natural gas (LNG) in the push for greater diversification.

Mr. Holness said the Government is also looking at increasing the usage of biofuels renewable energy, noting that he has given a directive to the Minister of Science, Energy and Technology, Dr. the Hon. Andrew Wheatley to “pay more attention to developing the biofuels sector”.

Turning to the status of the country’s oil refinery, the Prime Minister assured that the Government is working to upgrade the facility and has made financial commitments towards achieving this objective.

“I want to assure the country that the Government is doing everything possible to ensure that our refinery is upgraded to be one of the most modern refineries in the region, to supply not just our energy needs but that of the region,” he said.