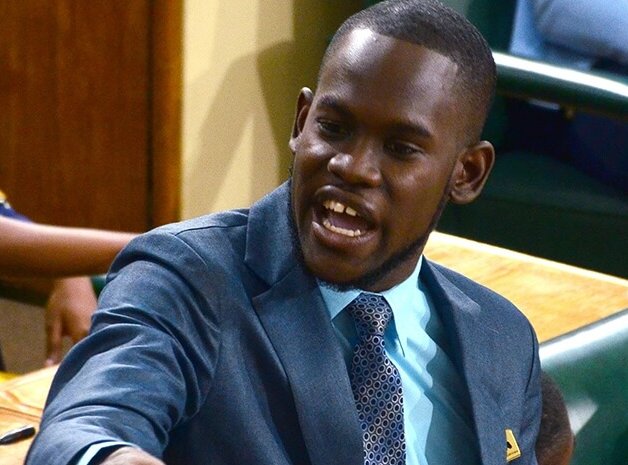 Opposition leader at the National Youth Parliament, Andrew Johnson, offers a spirited defence of his point during the sitting of the event on Monday (November 11), at Gordon House in Kingston.

The young people, representing youth groups from all across the island, engaged in spirited debate on the issue of abortion, youth participation in the political process, youth violence, and climate change, proffering a number of recommendations for the Government to consider.

On the issue of abortion, suggestion was made to have Jamaicans vote in the next general election on whether abortion should be allowed conditionally or unconditionally.

The youngsters called for the matter to be given urgent attention in light of the growing concerns about botched abortions, which has now become the third leading cause of maternal death in the country.

Youth Parliamentarian, Tedra Morris, argued that “every woman should have the right to secure a safe abortion from qualified professionals at the best facilities using properly sterilised instruments”.

“Women should have that moral right to determine what should be done with their body,” she said, noting that it is the poorer women in the society who were suffering the most.
Calls were also made for the Government to allow young victims of rape and incest to undergo abortion without criminal sanction, and if the State chooses not to go this route, that it partner with the church to accept children who were conceived in those unfortunate situations.

They said that the Government could look at the Barbados model, which sanctions abortions based on the risk to a mother’s life, rape, incest, the mother’s mental and physical state and whether the child would suffer any physical or mental abnormality.

The vocal young leaders also called for the removal of the general saving law clause in the Constitution, which prohibits any Jamaica from bringing a constitutional challenge to the laws governing abortion.

Meanwhile, as it relates to increasing youth participation in the political process, a number of suggestions were put forward, including implementation of the civic curriculum in secondary schools and the use of electronic voting (e-voting) to include youth in the diaspora.

“It is time for Jamaica to join in on the positive outcomes experienced by other countries, like Finland and Estonia, due to the implementation of this system (e-voting),” said Jhanelle Todd.

“This means that young Jamaican professionals that have migrated can still play a role in their country,” she added.

Turning to youth violence, the young parliamentarians proposed implementation of a positive parenting model, which would offer mandatory classes for all parents who access the public health system.

Also suggested were repeal of the maternity law and replacement with a parenting leave law where both parents are granted paid leave, and a tax exemption policy for employers who provide jobs for an undefined number of at-risk youth.

On the matter of climate change, the young people called for the establishment of a Climate Smart Endowment Fund for climate change response strategies and activities and the creation of a youth-in-action loan facility, which would be funded by a cess of $1 levied on all polyethylene terephthalate (PET) bottles.

Citing a 2018 study by the Caribbean Policy Research Institute, which found that the country produced 650 million bottles per year, Javon East argued that if the cess were instituted, it would be possible to collect $650 million.

He said that the funds could be used to empower youth to create business ventures that would support the country’s climate change needs and boost the economy.

More than 100 youth leaders participated in the National Youth Parliament.

The event was instituted in November 2003 as a non-partisan initiative aimed at providing youth from across Jamaica with a forum to express their views, network and debate issues of concern in the House of Representatives.