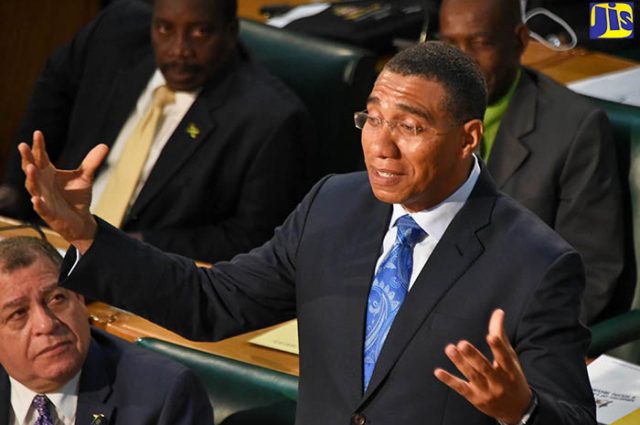 Prime Minister, the Most Hon. Andrew Holness (right), addresses the House of Representatives on February 13. At left is Minister of Finance and the Public Service, Hon. Audley Shaw.

The Zones of Special Operations (ZOSOs) in Mount Salem, St James, and Denham Town in Kingston are to be extended by a further period of 60 days.

The House of Representatives on February 13 approved two Resolutions requesting the extensions, which were moved by Prime Minister, the Most Hon. Andrew Holness.

Mr. Holness said the additional time is a necessary enabler for the intensified delivery of social services and infrastructure investment, which have already commenced but must be much further realised.

This would be the third extension for the Mt. Salem Zone, the first to become operational on September 1, 2017, while it will be the second extension for Denham Town in West Kingston.

The zones were established under the Law Reform (Zones of Special Operations) (Special Security and Community Development Measures) Act, which was passed in Parliament last year.

The law seeks to contain crime while safeguarding the human rights of residents and promoting community development through social intervention.

Prime Minister Holness said the implementation of the zones has been justified, and the results speak for themselves.

“We accepted from the onset that achievements in these areas could not be realised in the limited period allowed by the legislation. Nevertheless, it is important to note that the Government’s resolve to continue and extend the Zones of Special Operations represents an important pillar (among other factors) to a long-term approach to crime. It is not a quick fix,” he emphasised.

He added that the decision to continue the extension is also justified, given that there has been no report of murder or gang-related serious crimes in either of these two communities since their respective periods of declaration.

“Likewise, there has been no report of abuse by State actors. Moving forward, the security forces are expected to maintain an effective presence to facilitate the social-intervention work, which is already under way. These efforts have already begun to yield important results and have largely been supported by the community,” the Prime Minister said.

The Zone can only be established after the Police Commissioner and the Chief of Defence Staff make a request for such a declaration in writing to the Prime Minister.