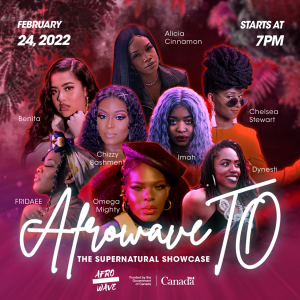 Omega Mighty – Omega is an eclectic singer-songwriter and performance artist who seamlessly fuses elements of R&B, reggae-dancehall, afrobeats, and trap. This multidisciplinary talent has choreographed everything from the Grey Cup halftime performance for the Arkells, and for her Polaris Music Prize award-winning sister Haviah Mighty.

Dynesti– Dynesti AKA Dyna dishes royal hip-hop & soul with a dash of Rudegyal (feminine Caribbean attitude). Dyna is half Jamaican, half Trinidadian, and “Dyna” is also how Caribbean people pronounce “Diner”. In 2021, her debut album The Dyna was released in five parts: Say Grace, Break Fast, Lunch, The Last Supper, and Dessert.

Alicia Cinnamon – In 2013 Alicia Cinnamon came to national attention after she wrote and performed a song dedicated to a young man named Tyson Bailey who was gunned down in Regent Park, Toronto. A year later she released her debut mixtape “A Dash of Cinnamon” featuring the track “Liar’s Game” which went on to chart on Toronto urban radio and garnered her a following with R&B fans as far away as the UK and Atlanta, Georgia.

Benita– Benita is an independent artist and songwriter whose music incorporates elements of R&B, pop, and alternative. Benita sang backup vocals on a string of sold-out shows for GRAMMY award-winning singer Daniel Caesar. In 2019, Benita reached the top 10 list of CBC’s Canada wide Searchlight competition for her song “Anything.”

Imah– Imah is a Senegalese singer/songwriter whose music is inspired by afrobeats, afro house, RnB, pop and hip hop. Being multilingual is something she’s very proud of and it shows up in her music, by mixing French, English and Wolof. Imah’s talents also include photography, graphic design, videography and fashion design and more.

Fridaee– Canadian pop-fusion artist Fridaee has been performing in Toronto since the age of eight, singing with the Toronto Children’s Concert Choir & Performing Arts Company (TC3) for over 10 years as a soloist, and performing as a member of their African, Contemporary, and Hip Hop dance teams. This led to touring with TC3 across Canada, England, and the United States. Fridaee has also performed alongside EDM-crossover band Sound Empijah.

Founded in 2019 and spearheaded by Jamaican-Canadian artist Lexxicon , AFROWAVETO’s mission is to provide growth opportunities for Black multi-genre musicians working within the Toronto music industry through intentional music programming, the creation of safe spaces, and through community and cultural connections. While Toronto has a large population of emerging and successful African, Caribbean, Indigenous Black Canadian and Afro Latinx musicians, this is not reflected in the local music festivals, showcases, panels, or song writing sessions held within the city. Despite the unprecedented growth globally in these culturally-driven sounds, that momentum hasn’t been reflected in the national Canadian marketplace and ecosystem or the local Toronto music landscape.