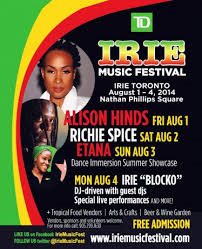 The golden age of Canadian reggae left an indelible imprint in the country’s musical landscape. It’s a legacy that continues to influence today’s music scene with Toronto and/or Canadian connections in many of the successful pop/reggae infusions that are charting everywhere. Rolling Stone acknowledged the impact of Toronto-based reggae artists such as Messenjah, Sattalites and Jackie Mittoo on current chart-topping acts such as Magic! (Rude). Celebrating this particular heritage, the 12th Annual IRIE Festival Opening Ceremonies will feature a Who’s Who of Toronto’s reggae elite, performing for the first time ever on stage together at 12:00 p.m. on Friday, August 1, at Nathan Phillips Square. The concert takes place a mere kilometre away from the former location of the BamBoo Club, the city’s central nerve for reggae which attracted some of reggae’s true pioneers who called Toronto home. The opening ceremonies kick off a weekend-long festival featuring some of reggae’s hottest international acts including Richie Spice, Etana, and Alison Hinds.

“Bands like Earth, Roots & Water, Ishan People, Truths and Rights, 20th Century Rebels, Messenjah and Sattalites laid the foundations for reggae music in Canada,” says IRIE Festival Artistic Director Phil Vassell, who is also a vital voice for Toronto’s Caribbean community as editor of WordMagazine. “The Toronto melting pot of the 1970s was fertile ground for the mixture of Jamaican-Canadian influences, and what happened in the music scene up until the early 1990s still reverberates within the pop music scene.”