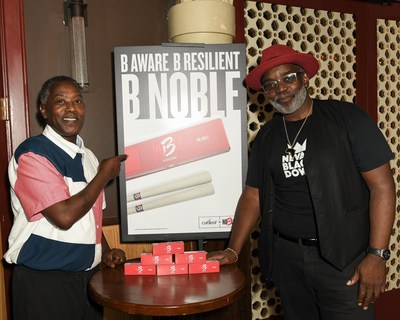 Partner with Curaleaf to Launch B Noble Brand

WAKEFIELD, Mass., July 13, 2021 /PRNewswire/ — B Noble Inc. and Curaleaf Holdings, Inc. (CSE: CURA) (OTCQX: CURLF) (“Curaleaf” or the “Company”), a leading international provider of consumer products in cannabis, today announced the launch of the B Noble brand in Massachusetts and Maryland, with a national rollout continuing into Fall 2021.

B Noble was founded by well-known visual artist, filmmaker and hip-hop pioneer, Fab 5 Freddy, to raise awareness and create funding to defend people from cannabis-related criminalization. The brand is dedicated to telling the story of namesake Bernard Noble, who was arrested in Louisiana and sentenced to 13 years hard labor in prison for possessing the equivalent of two joints. In 2017, Bernard’s case began to draw attention across the country, and he quickly became a national symbol for the need to reform the country’s unjust drug laws, sparking advocacy and a movement to free him. As a result, Bernard was released seven years into his sentence.

To call attention to Bernard’s harsh sentence, the B Noble brand will partner with Curaleaf today, on 7/13 (a date representing the 7 years of a 13-year sentence that Bernard served), to release two-packs of high-quality one-gram pre-rolls, symbolizing the two grams of cannabis for which Bernard was arrested.

“Making the film ‘Grass is Greener’ for Netflix, I got an in-depth education about the history and truth around cannabis,” said Fab 5 Freddy. “And the many lies told that led to this vital plant’s criminalization and the thousands of lives damaged, like Bernard Noble’s, which became a call to action for me.”

“My life re-started when I walked out of prison with the cameras rolling on me, and I met Fab. I’m excited to now be working with Curaleaf in helping to educate, inform and bring a high-quality product to the people,” said Bernard Noble.

Ten percent of proceeds from the sale of each B Noble product will be donated to a local organization dedicated to advancing social equity and providing opportunities to those directly impacted by the War on Drugs. Massachusetts products will benefit MASS CultivatED, an organization that supports cannabis reform and helps provide pathways toward a successful post-incarceration future. In Maryland, proceeds will go toward Changing Perceptions, an organization working with previously incarcerated individuals seeking to re-enter the workforce. These carefully selected organizations are supporting those who were incarcerated for non-violent cannabis-related charges and working to remove the residual societal barriers associated with a cannabis-related conviction, setting up newly liberated citizens for a successful transition home and for future opportunity.

“We are incredibly proud to bring this brand and product to market with Bernard Noble and Fab 5 Freddy. Bernard’s life epitomizes the countless individuals who share his story, and this partnership serves as a reminder of the change and opportunity that can happen when people work together,” said Curaleaf Chief Executive Officer Joe Bayern. “We at Curaleaf are thrilled to use our national platform to advance social equity in cannabis, and support a brand with such tangible purpose.”

B Noble Pre-Rolls can be found in Massachusetts and Maryland Curaleaf retail locations and at key wholesale partner stores, with additional states to come. To learn more about B Noble, please visit: www.curaleaf.com/bnoble.