NEW YORK, June 28, 2022 /PRNewswire/ — Culture’s biggest night, the “BET Awards” 2022, remains the undisputed #1 cable awards show among P 18-49 for the 2022 broadcast season. Celebrating Black excellence, creativity, ingenuity, and innovation, the LIVE award show is now the best performing cable award show with viewership this year* “BET Awards” 2022 premiered Sunday, June 26, and drew 3.2 MM Total Viewers P2+ (EDAC), as it was simulcast LIVE across 10 Paramount Global networks, including BET, BET Her, Comedy Central, Logo, MTV, MTV2, Pop, TV Land, and VH1, up +34% vs last year. 2.1 MM Total Viewers P2+ tuned in on BET alone.* BET now holds the Top 2 Cable award shows of 2022 for Black viewers: “BET Awards” 2022 (#1) and “NAACP Image Awards” (#2).* The special, jammed-packed with must-see moments, secured the #1 Most Social Show on ALL of TV. The “BET Awards” 2022 was the #1 most-watched TV show on social and the best-performing telecast on BET Digital ever across Instagram Reels, YouTube, and Facebook with +103 MM social views.** #BETAwards trended on Twitter in the #1 spot consecutively for five hours worldwide. Fans can catch an encore presentation on Thursday, June 30 at 9 PM ET/PT on BET. 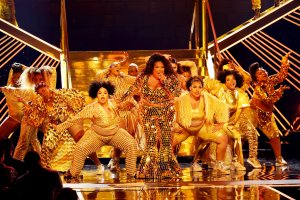 “We couldn’t be more thrilled about this year’s ratings! Every year, we strive to have the BET Awards celebrate and reflect that which is best and most important to our community and culture in our hope to inspire them to dream big and take action.  I salute my colleagues for delivering an event that has so profoundly resonated, “said Scott Mills, CEO of BET.

“We always knew we had a very special show, but now the ratings confirmed we are truly culture’s biggest night! We are grateful to our audience for tuning in live and on social media, all who stepped on stage, from the artists who delivered show-stopping performances and their teams, to our winners, nominees and presenters. We could not be more proud,” said Connie Orlando BET EVP, Specials, Music Programming & Music Strategy.

The “BET Awards” 2022 celebrated the very best in entertainment and culture with performances and appearances by an inspiring lineup of artists, entertainers, and cultural icons. The “BET Awards,” which has become synonymous with powerful Black artistry and social commentary, continued to spotlight and celebrate the artists and creators of tomorrow, making the ceremony one of the most news-provoking and talked-about broadcasts year after year.

Internationally, the show was simulcast on BET Africa, BET France and will be available to watch on My5 and Sky On-Demand in the UK, as well as BET Pluto in the UK and Brazil.

For more information on the “BET Awards” 2022, please visit BET.com/bet-awards.