Costa Rica seizes 1.5 tons of pot thrown into sea by smuggling boat during chase in Caribbean 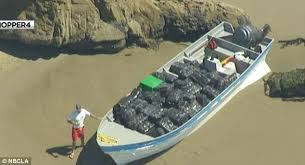 SAN JOSE, Costa Rica _ Costa Rica’s coast guard has recovered 1.5 tons of marijuana that officials say was thrown into the sea by smugglers being chased in the Caribbean after a tip from the U.S. Drug Enforcement Administration.

Security Minister Celso Gamboa said Saturday that the pot appeared to have come from Jamaica and that the smugglers were headed for Panama. He says the DEA alerted Costa Rica to the suspicious vessel.

Costa Rica’s government says joint anti-drug efforts with the U.S. have led to the seizure of nearly 20 tons of cocaine and 3 tons of compressed marijuana so far this year. It says 17,216 people have been arrested.