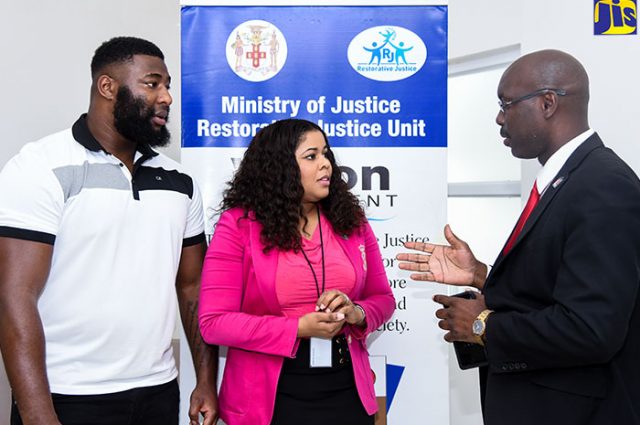 British Criminologist and Gang Reform Specialist, Craig Pinkney (left); Coordinator of the Ministry of Justice’s Restorative Justice Unit, Kahilah Whyte; and Director of the Ministry of Education’s Safety and Security in Schools programme, Assistant Superintendent of Police, Coleridge Minto, in conversation at the Ministry’s Constant Spring Road offices in Kingston, on February 6. They were attending an interactive session with restorative justice practitioners.

In his address, Mr. Pinkney outlined the causes of violence and possible strategies to reduce them.

He said violence is attributable to several main factors, including poverty, lack of opportunity, high unemployment, lack of education, trauma, limited police presence in communities, dysfunctional families and a breakdown in the relationship between the police and community members.

Mr. Pinkney called on the key stakeholders with access to violence perpetrators to engage them in their communities to effect change.

He said these could include government officials, police personnel, religious leaders, educators and research teams, and could provide data to develop community strategies to implement change.

Restorative Justice Week aims to educate the public on the value of restorative justice as an alternative mechanism for conflict resolution.

The week’s activities commenced with a Church service on February 3 at the New Haven Seventh-day Adventist Church in Kingston.

Other events include a public lecture on February 7 at Moneague College in St. Ann on the topic ‘A Restorative Approach to Gang Violence in Jamaica’; and the Ninth International Restorative Justice Conference on February 9 at the Spanish Court Hotel in Kingston. Mr. Pinkney will be the guest speaker at the conference.

Restorative justice is a process whereby all the parties with a stake in a particular offence come together to resolve, collectively, how to deal with the aftermath of the breach.

It focuses on holding the offender accountable in a more meaningful way. It repairs the harm caused by the offence, helps to reintegrate the offender into the community and helps to achieve a sense of healing for both the victim and the community.

Communities where the Restorative Justice Programme is under way include Trench Town, Jones Town, Craig Town and Hannah Town, in St. Andrew; Greater Allman Town and Fletcher’s Land, in Kingston; communities in Spanish Town, St. Catherine; May Pen and surrounding areas, in Clarendon; and communities in Westmoreland and St. James.