Deva Bratt gets US visa 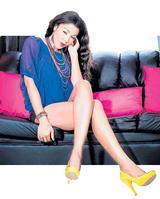 As she prepares for the Magnum All-Star Million Dollar Face Off celebrity clash, D’Angel says she is happy she is not a selector by profession.

“Preparation has been very intense, so I am happy I am not a selector. I have to be doing the road like a while line and bleaching a studio fi get dubs,” she said. She will go up against Ishawna tonight.

While she expects the experience to be fun, she says, “mi a prepare fi anything.”

She continued, “Mi excited and anxious and nervous bad at the same time. I am anticipating the clash, but still trying to maintain my composure.”

She said the preparation process has been intense, but was reluctant to give away her secrets.

“It doesn’t matter who coach you, you have to be naturally spontaneous,” she said.

“I take this face-off with pride, and I still want to walk away alive musically.”

As for her music career, she said her song, March Out, is currently in rotation and No. 1 on UK’s Vision Chart.

And leading up to the Christmas season, she says she has shows in Connecticut and St Kitts, as well as the Boom Roadshow. Meanwhile, she said fans can keep connected with her via Twitter- @dangel_music and on Instagram at dangel_music, while bookings can be done at angelsproduction@gmail.com.

Ishawna to bring ‘A’ game in Celebrity Face-Off

While she will be stepping out of her comfort zone, singer Ishawna plans to bring her ‘A’ game when she faces off with D’Angel in tonight’s celebrity clash during the Magnum All-Star Million Dollar Face-Off.

Speaking with THE STAR recently, Ishawna said she will be venturing on to unfamiliar ground tonight at Famous Nightclub in Portmore, but her preparation has been going good.

“It’s been going good so far. It’s a different experience, so I am just excited. It is a chance for people to see a different side of Ishawna,” she said, noting that she has been doing her research.

“There’s adrenaline. I am excited and nervous. It is something different, not in my comfort zone, so I am just going in with an open mind. Just expect me to bring a different Ishawna. I will be in alter ego mode. Just know seh tonight it a guh turn up.”

Meanwhile, she said she recently released a music video for her song, No Fear. In addition, she said she has new songs like Need Love, No Way and See My Name In Light.

For the original report go to http://jamaica-star.com/thestar/20131107/ent/ent5.html