Grammy-award winning record producer, Delly Ranx, is in the UK promoting his all-reggae Silent Giant album. This 11 track album is all about the producer’s hitting some high notes in his musical career. 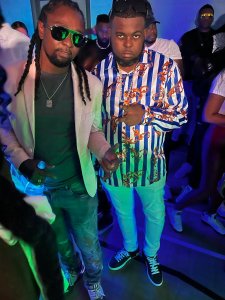 Since arriving in the UK on September 15, 2022, Delly Ranx is having a busy schedule.

“I left Atlanta, US, September 14th, arriving at Heathrow Airport a day later (September 15th). Since then, I have been doing constant radio interviews. One such being Conscious Radio FM in London. This, with DJ Guvanor was a live stream telecast in Spain, Italy and Australia. I also did promotions on Robbo Ranx radio and others.

“This was all about the Silent Giant album and trust me there were great comments during and after the show. Comments include,

‘This one (album) ready for the world,’ and ‘I am ready to purchase the album.

“I did a phone interview on Roots FM with DJ Bush Man and the response is similar with dozens of persons trying to get on line.”

On Saturday night, Delly Ranx performed at a sold-out event held at Tottenham Leisure Centre. “This was Andrew Fresh celebrating his 27 years as a selector in music and his birthday bash.”

His tour will continue when he returns to US then to Australia in November.

“I won the contest with a song called, “Two Fowl Buck Up A Princess Street.”

He began producing in 1994 and is credited for producing “Ganja Breed” – a track on Sean Paul’s Dutty Rock  grammy- winning album. In addition, to Movado “Weh Dem a Do” and Popcaan’s “Family.”