Disneyland Resort Continues its Legendary Comeback in 2022 with the Return of Nighttime Spectaculars, an Expanded ‘Celebrate Gospel!’ Event and Themed Experiences Beginning in January

ANAHEIM, Calif., Dec. 9, 2021 /PRNewswire-HISPANIC PR WIRE/ — The Disneyland Resort is celebrating 2022 with the thrills, magic, fun and adventure that have made the “Happiest Place on Earth” one of the most popular family vacation destinations on the planet. In spring 2022, the imaginative “Main Street Electrical Parade” will light up Disneyland Park for the iconic parade’s 50th anniversary year, and guests will be treated to the return of three nighttime spectaculars: “Fantasmic!”, “World of Color” and the “Disneyland Forever” fireworks spectacular.

Throughout 2022, the Disneyland Resort will be the place for friends and families to make memories together, for little ones to see a favorite Disney character, for foodies to savor a splendid meal or Disney treats, and for seasoned park-goers to begin their next adventures. The choices range from exciting attractions like Star Wars: Rise of the Resistance to captivating entertainment, limited-time festivals and seasonal celebrations for Halloween in the Fall and for Holidays beginning in November.

At Disney California Adventure Park, Avengers Campus continues to be a popular destination. Guests are coming to the aid of Peter Parker on WEB Slingers: A Spider-Man Adventure and becoming warrior allies with the Dora Milaje, while heroic encounters have included Loki, Black Panther, Black Widow, Ant Man and The Wasp. Festivals return to this park in spring of 2022 with Lunar New Year celebration and Disney California Adventure Food & Wine Festival.

In addition, guests will find plenty of Disney magic at the Hotels of the Disneyland Resort, along with new shops and popular dining locations at the Downtown Disney District. 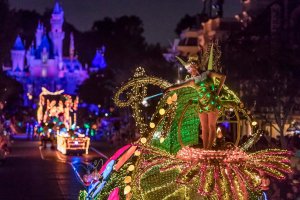 Guests at the Disneyland Resort will be thrilled to once again enjoy some favorite nighttime spectaculars, beginning this spring.

It’s the Year of the Tiger in 2022 and Tigger will join in on the fun, along with beloved Disney characters including Mulan and Mushu, Mickey and Minnie, and the Three Little Pigs – all donning their festive attire. Cherished Lunar New Year traditions include the Lucky Wishes Wall and “Mulan’s Lunar New Year Procession,” a performance that honors family, friendship, and the potential for a fortune-filled new year.

Adding to the excitement, Raya from Walt Disney Animation Studios’ film “Raya and the Last Dragon” will make her first appearance at Disneyland Resort during the celebration. Guests are invited to welcome Raya and catch a glimpse of the glistening dragon gem among the blooming Kumandran flowers, nestled deep in the heart of the Redwood Creek Challenge Trail.

The Sip and Savor Pass* will be available for select food and non-alcoholic beverages at participating Lunar New Year marketplaces, all featuring delicious Asian cuisine.

Disney California Adventure Food & Wine Festival returns in 2022 with its unique “tour” of California regions and neighborhoods, from March 4-April 26, 2022. This festival is a showcase for delicious fare, vibrant entertainment, festival merchandise and even time with Chef Goofy.

A dozen festival marketplaces will offer mouthwatering bites and beverages for every palate. Complimentary culinary demonstrations with visiting, local, celebrity and Disney chefs will return for park guests to enjoy on Saturdays and Sundays during the festival. To further enhance the festival experience, guests may book and purchase signature events such as the Carthay Circle Winemaker Receptions, and the Wine, Beer and Mixology Education & Tasting Seminars.

Guests may purchase a Sip and Savor Pass* for the festival’s marketplace offerings.

Cars Land turns 10: The year 2022 is a time to celebrate unforgettable milestones at the Disneyland Resort, including the 10th anniversary of a major expansion at Disney California Adventure. On June 15, 2012, the first guests strolled along the new Buena Vista Street, with shops, architecture and theming reminiscent of Los Angeles in the late 1920s/early 1930s. Guests also discovered Cars Land, where “car” residents like Lightning McQueen and Tow Mater cruise along Route 66 in Radiator Springs. The grand new attraction in the land, Radiator Springs Racers, has become as popular as the blockbuster “Cars” films from Disney and Pixar.

Disneyland After Dark** events return with more “Nites” of after-hours fun on select nights in 2022. Sweethearts’ Nite will be presented on five evenings in February at Disneyland, Villains Nite on two evenings in March at Disney California Adventure, and Star Wars Nite on three evenings in May at Disneyland, including the eve of May the 4th. That’s more nights than ever before for these limited-time events that have unique themes, character experiences, special nighttime entertainment and more. Tickets are limited and will be available at Disneyland.com/DisneylandAfterDark, with sales for Sweethearts’ Nite beginning Dec. 9, 2021, and sales for Villains Nite and Star Wars Nite beginning Jan. 11, 2022.

Specialty retailers Pelé Soccer and Lovepop will soon be opening shops in Downtown Disney District. Pelé Soccer is a stadium-themed store offering soccer gear from renowned global sports brands and national team jerseys from around the world at a shop named after Pelé, the legendary Brazilian superstar. Lovepop offers eye-catching, 3D pop-up cards and gifts that take paper art to new heights. Created by two ship designers, Lovepop combines engineering and modern technology with the ancient art form of kirigami, a variation of origami that intricately cuts paper rather than folding.

Post 21 is a new Black-owned, woman-owned retailer offering curated modern and design-forward merchandise from Black-owned businesses, including products for family, home, gifting and more. Guests will find this specialty kiosk between the World of Disney and Starbucks.

Continuing the momentum that began in 2018, a multi-year project will begin in January 2022 with plans to transform the former AMC Theatres building and adjacent area into a stunning new lifestyle space. Drawing inspiration from Southern California mid-century modern architecture, the area will be a beautiful blend of vibrant color palettes, multi-cultural design elements and patterns, an open lawn for relaxation and future events, and an even broader collection of dining and shopping.

At Mickey’s Toontown at Disneyland Park, Imagineers will be working next year to reimagine the land with some all-new experiences for families and young children that will feature new play experiences, as well as open, grassy spaces. Those are expected to open in 2023, along with Mickey and Minnie’s Runaway Railway.