The SDGs, also known as the Global Goals, are a collection of 17 goals set by the UN General Assembly in 2015 that are to be attained by 2030. They cover social and economic development issues, including poverty, hunger, health, education, global warming, gender equality, water, sanitation, energy, urbanisation, environment, and social justice. 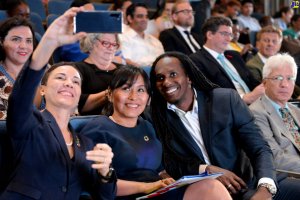 “I want to encourage the UN to think about the type of technical advice that may be needed at a higher level or in a greater volume for countries like Jamaica, across the region, which are dealing with complex issues, to support or add to the extremely competent national expertise which we have on the ground,” the Minister said.

Senator Johnson Smith was speaking at a UN Day 2019 ceremony, at the Courtleigh Auditorium, in Kingston, on Thursday (October 24).

“We’re looking to supplement domestic capacity in order to move us more quickly to where we need to be,” the Minister said while pointing out that Jamaica has lost a lot of time in its effort to actualise the different goals, although it has made some strides.

She emphasised that the SDGs underpinning the 2030 Agenda for Sustainable Development are the key to efforts by developing countries to deliver a better quality of life to their citizens.

“We are, however, all confronted with the reality that countries like ours need to mobilise an enormous pool of capital to implement the SDGs,” said Senator Johnson Smith.

She argued that this calls for creative approaches to investments that can be catalytic in impact and can drive positive outcomes across multiple SDGs.

In the meantime, she assures that the Government remains committed to maintaining, developing and implementing policies that have a clear goal of improving the lives of all Jamaicans.

According to the Minister, in 2017, Cabinet approved a road map for Jamaica’s implementation of the SDGs, which is now more than 91 per cent aligned with the SDGs.

“The road map outlines critical steps towards the achievement of Agenda 2030, covering how it is we align national priorities, identification of accelerators, financing, data requirements, institutional coordination, and advocacy. And all of these are critical to getting where we need to be,” the Minister said.

She congratulated the UN on its 74th anniversary and thanked the organisation for continuously supporting the efforts of member States to address a wide range of dynamic issues facing their countries.

The United Nations Day, which was held under the theme ‘I am the SDGs’, facilitated a national youth dialogue on the SDGs and how young people can lead the actions to achieve the SDGs and Jamaica’s Vision for 2030 for all Jamaicans.

Some 300 students, including members from the deaf and visually impaired communities, participated in the event.