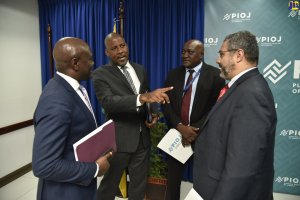 The Planning Institute of Jamaica (PIOJ) is reporting an estimated one per cent first quarter fiscal year growth for April to June 2019.

Director General, Dr. Wayne Henry, says the out-turn, buoyed primarily by a 1.4 per cent expansion of the Services Industry, extends Jamaica’s growth trend to 18 consecutive quarters or four and a half years, despite the overall flat performance in the Goods-Producing Industry.

He was speaking at the PIOJ’s quarterly briefing at the Institute’s head office in New Kingston on Monday (August 26).

Dr. Henry said the June quarter out-turn largely reflected increased capacity utilisation at some industrial plants, such as State refinery, Petrojam; increased external demand, which drove output in some export industries, such as Hotels and Restaurants; increased domestic demand, facilitated by higher levels of employment, which enabled growth in sectors such as Manufacturing, and Finance and Insurance Services; and the continued positive impact of the resumption of operations at the Alpart alumina refinery, albeit at a slower rate.

He noted, however, that further growth was stymied by drought conditions, which negatively impacted output in agriculture and constrained growth in the food-processing component of the Manufacturing Industry; and the winding down of several major infrastructure projects during the review quarter. 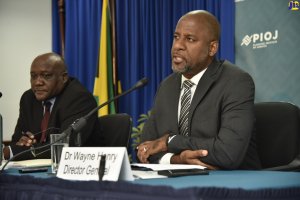 These, the Director General pointed out, include the Hagley Park and Constant Spring Road Improvement Projects, “which had contributed significantly to growth in construction during the corresponding quarter of 2018.”

Meanwhile, Dr. Henry said the 1.4 per cent Services Industry out-turn, which reflected growth in all subsectors, was largely spurred by an estimated 5.6 per cent expansion in Hotels and Restaurants, consequent on a 7.8 per cent increase in foreign national arrivals.

Dr. Henry pointed out that stop over arrivals from Canada contracted by an estimated 4.8 per cent, to 85,712 persons.

Additionally, he said cruise passenger arrivals also contracted by 23.2 per cent to 273,823 persons, resulting in a three per cent reduction in total visitor arrivals to 956,209.

Despite this, the Director General said visitor expenditure increased by 10.2 per cent to US$852.7 million. 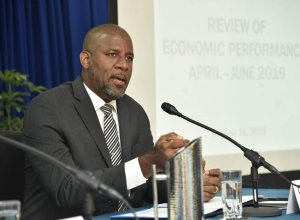 Provisional data, he added, indicate that airport arrivals increased by 4.8 per cent for July 2019, relative to the corresponding period last year.

He further pointed out that growth in the other seven services subsectors ranged between 0.1 and 1.8 per cent.

Dr. Henry said the Goods-Producing Industry’s flat out-turn was largely attributed to improved performances by the mining and quarrying, and manufacturing industries, which grew by 4.5 and 1.7 per cent, respectively.

He noted that the growth in mining and quarrying resulted from increased alumina production of 7.5 per cent to 624.7 kilo-tonnes, despite crude bauxite production contracting by 18.5 per cent, reflecting lower demand from third party customers.

Real value added in manufacturing, Dr. Henry informed, resulted from increased output in the ‘Food, Beverage and Tobacco’ and ‘Other Manufacturing’ components.

He pointed out that these were counter-balanced by estimated contraction of 2.5 per cent in the Agriculture, Forestry and Fishing Industry, and one per cent in construction.

Dr. Henry said the drought conditions affecting agriculture stemmed from below normal rainfall levels during the months of the review quarter.

“This resulted in lower production of ‘Other Agricultural Crops’, down 1.3 per cent, and ‘Traditional Export Crops’, down 12.5 per cent. These contractions outweighed an estimated growth in animal farming, up 1.9 per cent,” he outlined.

The Director General said contraction in construction reflected a 28.2 per cent reduction in expenditure by the National Works Agency (NWA) for road expansion and rehabilitation work, consequent on the winding down of several major infrastructural projects, and delays in the start-up of new developments, scheduled to commence this year; and an 11 per cent reduction in Jamaica Public Service (JPS) expenditure, consequent on a lower spend on power transmission and distribution following completion of the JPS’ 190-megawatt Old Harbour plant.

He pointed out, however, that there was an estimated growth in Building Construction, reflective of the continuation of work started in previous quarters, as well as new building activities, commencing during the quarter.

Meanwhile, Dr. Henry said growth for January to June 2019 is estimated to have increased by 1.4 per cent, relative to the corresponding period of the previous year.

The Director General said the growth prospects for July to September 2019 are “generally positive”, and expected to be in the range of 0.5 to 1.5 per cent.

This, Dr. Henry noted, is based on the anticipated strengthening of the performance of most industries relative to the similar quarter of 2018, while adding that growth is projected to be within the range of one to two per cent for the 2019/20 fiscal year.