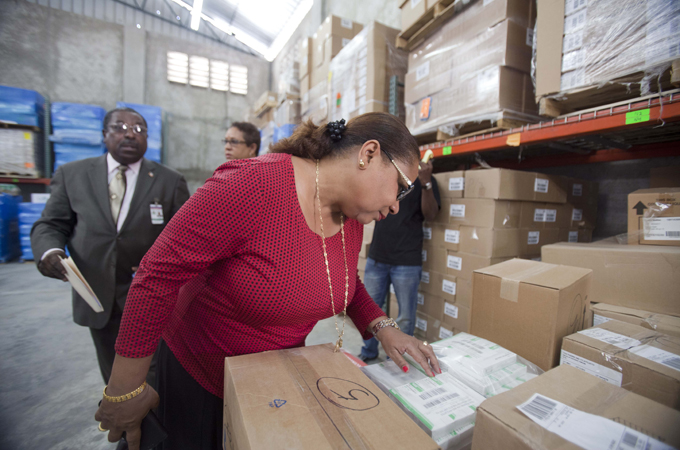 By David McFadden And Danica Coto

PORT-AU-PRINCE, Haiti _ Voting appeared orderly and largely peaceful in presidential and parliamentary elections that Haitians hope will help consolidate democracy in this impoverished country with a history of political turbulence.

Fears that Sunday’s voting would be a repeat of the problem-plagued first-round of legislative elections proved unfounded, human rights observers said. Celso Amorim, chief of the Organization of American States’ 125-member observer mission, said Haiti appeared to be “moving in the right direction.”

Haitians faced lengthy ballots featuring 54 presidential hopefuls and a slew of legislative and municipal candidates. Electoral officials said there might be partial results in 10 days but final results would not be ready until late November.

The presidential field was so crowded and confusing that there was little clarity about who might have been the leading contenders. Pre-election polls were unreliable and contradictory.

Despite the relatively orderly voting across the nation of some 10 million people, there were some logistical problems. Officials said there were roughly 70 arrests for various irregularities. Four polling stations were affected in areas of northern Haiti after ballots were burned, said Mosler Georges, executive director of the Provisional Electoral Council.

At a voting centre in Port-au-Prince’s Martissant slum, an elections supervisor yelled at dozens of people trying to force their way in. “No voting two times!” People shouted back that they were being prevented from voting once.

“I’m here to vote, and they are trying to stop me,” complained Varnel Polycard, a vendor of phone chargers who walked away fuming.

While the gritty district of Cite Soleil suffered from pre-election violence, it appeared to have the busiest voting centres in the Port-au-Prince area even in an atmosphere weighted with anxiety.

“Nothing can scare me from trying to see my country develop and see if Haiti can get better for my grandchildren,” Rosianne Jean said after casting her votes at a school in the deeply poor area of shacks and garbage-lined canals.

The continuing appeal of former President Jean-Bertrand Aristide was on display as over 1,500 people greeted him when he arrived at a voting centre near his home, many chanting “Aristide is our blood.” He was accompanied Fanmi Lavalas party candidate Maryse Narcisse, but some in the crowd said they were backing ex-Sen. Moise Jean-Charles.

Among the best-known names on the presidential ballot was Jude Celestin, a former head of the state-run construction company who was the government-backed candidate in the 2010 race. That time, he was eliminated from a runoff after his reported second-place finish was challenged by foreign observers who complained of irregularities.

Others included outgoing President Michel Martelly’s pick, Jovenel Moise, a political newcomer, and Jean-Charles, a sharp critic of Martelly who brands himself the voice for Haiti‘s poor and disenfranchised.