Count ‘Gotham,’ ‘Girlfriends’ and ‘True Detective’ among the best on TV (and video) in 2014 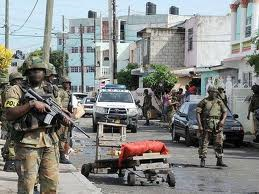 KINGSTON, Jamaica _ Adina Derby raised her voice in anger and grief as she recalled the morning when masked soldiers and police raided her West Kingston neighbourhood, using mortar rounds to blast through street barricades of junked cars and piles of wood.

“They come with blood in their eyes to kill off everybody!” Derby exclaimed, describing how she was shot in the back while trying vainly to save her wounded 20-year-old son by pushing him on a handcart to a nearby hospital.

Joan McCarthy recounted seeing policemen grab her nephew and son-in-law during a door-to-door search and hustle them out of sight. She said the officers dragged away their bodies minutes later wrapped loosely in a sheet taken from her own bed.

One after another, survivors from the warren-like Tivoli Gardens slum are telling a truth commission what they experienced during one of the bloodiest incidents in Jamaica‘s recent history, the 2010 raid to capture a gang kingpin who ran a criminal fiefdom that seemed untouchable until Jamaica reluctantly agreed to act on a U.S. extradition warrant.

The commission, which began hearing testimony this month from slum residents was appointed by the government largely in response to widespread complaints that authorities summarily executed people and trampled civil rights in the hunt for Christopher “Dudus” Coke, the second-generation leader of the feared Shower Posse gang. Police and military officials are expected to testify after the Christmas holidays.

The panel of two retired judges and a university professor is supposed to present a report and recommendations to the island’s governor general. It’s not yet clear whether any judicial proceedings will follow the testimony, which is expected to be completed within three months.

At least 76 civilians died during the May 2010 security operation, and the country’s public defender has said 44 of those may have been unjustifiable homicides. One soldier was killed.

Authorities have rejected allegations of brutality. Then-Police Comissioner Owen Ellington said the offensive was launched after gangsters loyal to Coke shot up police stations and burned two to the ground with Molotov cocktails. He said the raid and the two-month state of emergency that followed was also needed to beat back gangs that have long plagued Jamaica. There’s been a sharp drop in violent crime since.

It’s never been entirely clear what happened inside the Tivoli Gardens complex once troops began moving in on the morning of May 24, 2010 after then-Prime Minister Bruce Golding, the area’s representative in Parliament, dropped his nine-month opposition to Coke’s U.S. extradition warrant on drugs and weapons charges. Security forces sealed off streets, confiscated residents’ phones, and barred journalists from entering the area until the violence subsided.

At the time, police warned that Coke had an arsenal of illegal guns inside the slum, where he provided a lawless sort of order, and that scores of emboldened gunmen had flocked to the area to protect him from arrest.

But only six guns were recovered in the raid’s immediate aftermath. Many speculate that Jamaican forces actually met far less resistance than they claimed because Coke and many of his defenders had already fled, using gullies that crisscross the area. Police apprehended the gang boss a month after the raid only after he decided to surrender.

Human rights groups have welcomed the probe. Robin Guittard, Caribbean campaigner at Amnesty International, said the hearings could help “the credibility of the whole Jamaican justice system, which for years has been tainted with impunity for abuses from security forces.”

While some West Kingston residents hope the commission can expose what they insist are unlawful killings, Marjorie Hinds, a mother of six whose husband was killed in the raid, said she believes nothing will come of it.

“The system treats us like animals,” she said outside her rebuilt Tivoli home, which was severely damaged during the raid by a mortar shell fired by the Jamaican military. “I don’t think that’s going to change.”