Minister of Culture Olivia “Babsy” Grange has announced that a State Funeral for Jamaica’s 5th PM Edward Seaga will he held on June 23rd 2019 and that a period of four days will be set aside for Official mourning. June 19-22. During the period of .mourning all official government functions will be cancelled. Flags will be flown at half mark and a joint sitting of both houses of Parliament will be convened to pay tribute to The Most Honourable Edward Phillip George Seaga 89 who served as MP for almost 44 years. He was born in n Boston USA and came to Jamaica with his parents as a child. 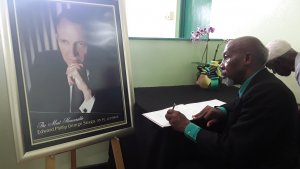 Seaga died on his birthday May 28 in Miami Florida where he was hospitalized for a short while.  His body was flown to Jamaica on Sunday June 4.
Public Signing
Condolence books have been opened both locally and overseas at our embassies to allow for those wishing to show their respects to the late Prime Minister who served for nine (9) years in that capacity to do so.  Forty three plus years as member of parliament for Western Kingston.
Housing Development
Seaga was a visionary and community/nation builder. He is credited with transforming a dump/slum called Back- a-Wall to now Tivoli Gardens into a modern community with high rise buildings with school and other amenities like a police station and a health facility to name a few services. It houses about 20, 000 residents. There have been a myriad of institutions for which Seaga has been known to conceptualize and build. Urban development Corporation (UDC) the Jamaica Stock Exchange are just a few.  The development of Ocho Rios is a community which was his brain child.
As we mourn. this great patriot we are comforted by the fact that he left a lasting legacy of enduring value.  Rest well Mr. Seaga.
Hopeton O’Connor-Dennie is Senior International Correspondent & photojournalist for Vision Newspaper Canada.