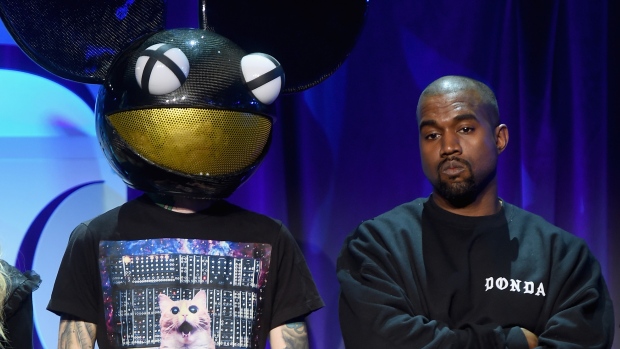 It started when the DJ from Niagara Falls, Ont., shamed West for uploading a photo of his web browser, which suggested he was illegally downloading Serum music editing software.

“Can’t afford serum?” tweeted the DJ, who is co-founder of the record label behind the software, which sells for US$189.

Deadmau5, whose real name is Joel Zimmerman, added a few expletives and insults directed at West in a series of tweets. He then made a tongue-in-cheek proposal to crowdfund enough money to buy West a legal copy of the software.

Within hours, West shot back at Deadmau5 by mocking his trademark mouse-themed headgear.

He asked whether Zimmerman checked his mouse head when boarding a flight or brought it onboard as a carry-on item. He then requested that Zimmerman dress as Minnie Mouse for his daughter’s birthday party.

Zimmerman and West have a lot in common, most notably their trigger-happy Twitter fingers _ both musicians commonly post fiery rants on social media.

They also both own stakes in the Tidal streaming music service, which hosted the debut of West’s new album last month. The rapper encouraged his fans to pay for a Tidal subscription rather than illegally downloading his album.

Last week, West took swings at Toronto-born music producer Bob Ezrin after he published a scathing takedown of the rapper’s career. West suggested that the producer of Pink Floyd’s classic “The Wall” wasn’t popular and asked him to refrain from speaking in public again.