If you love good music give me a round of applause. Keep the applause going until I say stop. But, don’t stop the music because music lives on and on and on. Suddenly, the applause keeps coming back, again and again. And, then I heard a big shout, STUNTIN!

That must have come from Mix Master David as everyone was looking in his direction. I went up to him and even the T-shirt he was wearing was marked STUNTIN. 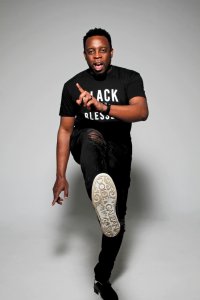 I came to realize that King David (as some people sees him) was a mix-master who lives in Atlanta.

“He is no ordinary mix-master,” the man next to me uttered, which reminds me of a man I had met years ago. He was tall and slim with spongy eyes and a mean look.

“If you looking for damn good music you got to come here. I have been following this dude for a long time. And, I ain’t tired of his music.”

He came closer and I could feel his passion. “The Lord really give some people some real extraordinary gift. I aint know what’s mine (gift) yet, and I am going close to eighty. Ain’t got a damn thing worrying about, just STUNTIN all the way.”

I couldn’t believe my eyes. The man was as fit as a fiddle, displayìng some foot moves which I had not seen for years. “Got to enjoy yourself bro. This STUNTIN is as good as wine. Give yourself some fun and this is where it’s at.”

STUNTIN features two other artistes, Verse Simmonds and Oxlade. Simmonds is an artiste from the Virgin Islands and is well-known for penning songs for the likes of Chris Brown and Nicki Minaj. He also partners with Jada Kingdom.

Mix Master David, a Jamaican-born now living in Atlanta, believes in giving his best in whatever he does.

“This song is all about a man who starts out life from a humble beginning and make it to the top. This is motivational, especially in these times when success comes with struggles and determination.

Verse Simmonds one of two artists featured on the single wrote the lyrics and sent it to Mix Master to be vetted. But, being a professional he (Mix Master David) thought  something was missing and contacted a friend, Willie Kigaro, who contacted “Oxlade”- who added an afrobeat lyrics to the mix.”

The song was recorded at an Atlanta based studio and released July 2021.. on the MMD records label.

“I started to be involved in music at age 10 by turning and locking off Step By Step Disco which played in my community.”

The young David thirst for the electronic media pushed him to gain as much experience from his friend. This impressed Perkins who allowed the station to have him freelancing.

David left Jamaica in 2000, playing in Miami, then other states including Atlanta and Philadelphia, Washington DC, and Charlotte, North Carolina.

“I became a celebrity, fully-rounded playing all genres of music . This include soca, pop, RNB and dancehall.

“I began playing seven days a week in Atlanta. I also learnt that music has a way of speaking to people. Music can also break down social barriers and if we can use music to unite people, then we are moving forward in creating a better world.