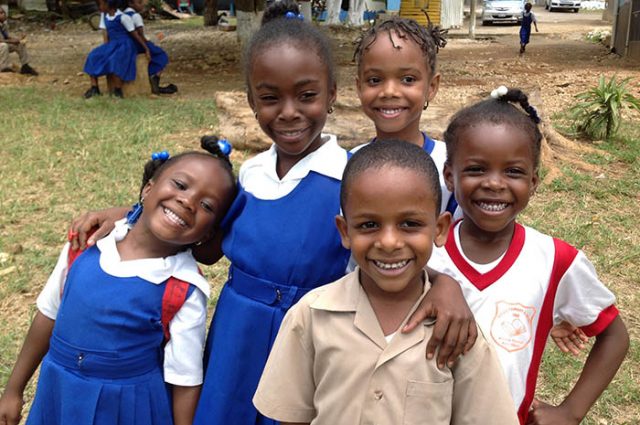 Photo: Students of the Infant Department at Mocho Primary enjoy a photo opportunity at the annual literacy fair held on June 15 at the school grounds in Dawkins, Mocho Mountains, Clarendon.

The grounds of the Mocho Primary School in Clarendon came alive with activity on June 15 as the institution staged its annual literacy fair.

The event, held every June, is geared at enhancing the literacy levels of students and bolstering academic performance generally, Principal of the school, Tina Reid, told JIS News.

Activities included reading competitions and dramatisation of characters from students’ favourite books. Pupils gave oral reports on books they have read and answered questions, for which they were awarded medals, trophies and certificates of participation.

Among the competitive events was the ‘decorate the door competition’ in which storyboards depicting themes from books were mounted. The contest, which was sponsored by Teacher Store and More, was judged by external adjudicators.

There was also a development session for parents, in which representatives from the Ministry of Education, Youth and Information provided tips on how they can build the literacy levels of their children at home and cater to children with special needs.

“Based on the feedback, it was well received by the parents and they looked forward to receiving this kind of dialogue with Ministry personnel,” Ms. Reid said.

The day concluded with a concert, with students performing original items about literacy.

Ms. Reid told JIS News that literacy scores have been trending upward; however, there was a decline last year, which she said was primarily due to attendance problems.

“We are remedying (that). Overall, we have been performing well at the national level,” she pointed out.

She is looking to acquire a smart board as well as computers and tablets, which would be “programmed with teaching and learning material to have our children utilise them in order to enhance literacy levels”.

“We want to expose our children to an array of electronic gadgets where they know that teaching and learning can take place not necessarily always via charts, but also via the tablet,” she told JIS News.

“This is the way technology and the world are going. In order for us to cater to the 21st century learner, we have to be on par with where technology is trending,” she added.

Meanwhile, Ms. Reid informed that the school, located in Dawkins in the Mocho Mountains, has also seen improvements in performance in the Grade Six Achievement Test (GSAT).

“We are still working on doing the data analysis, but based on looking on the raw score, our performance has improved,” she said.

She explained that in assessing performance “we look at where they (students) were in grade one, how they trended up at grade three, how they were at grade four, and what we have brought them to for the GSAT. We find that the children have improved tremendously and we are really proud of where they are now”.

The institution, which comprises an Infant Department, has 292 students on roll and 10 teachers on staff, including a teacher of reading, who also serves as Vice-Principal, and a guidance counsellor.

Ms. Reid, who began her journey at Mocho Primary as a youth service worker and returned as a classroom teacher in 2007 after completing her training, is highly positive about the school and is looking forward to further improvements.

She was appointed senior teacher in 2012, named acting principal in 2015 and promoted to principal recently.

“Here, I am now, principal of the institution where it all started for me. It has been a tremendous journey… I have been absolutely honoured to serve right here where I started, and because I’ve always been here, it seems like home. I have this love and passion to continue the work. So, I continue to serve humbly,” she told JIS News.