December 4, 2019 (Brampton) – Brampton’s Award winning musician David Record, received Gold Certification in the music industry for his Music DVD release Under Moonlight. He received his Plaque from Music Canada during the end of November 2019. Music Canada’s Gold Platinum Awards Program was launched in 1975 to celebrate milestone sales of music in Canada. With over 20,000 albums, singles, digital downloads, ringtones, and music videos certified over the past 44 years, the program provides a unique historical timeline of popular music in Canada. 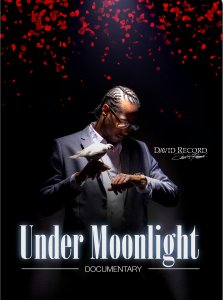 Under Moonlight was produced by Rise Again Entertainment Inc. which is a Canadian Entertainment Company founded by David Record. Other notable Artist that received Gold plaques during the same week of the Under Moonlight certification were Ariana Grande for single Don’t call me Angel, and Justin Bieber for the single 10,000 Hours.

The Under Moonlight is a film and soundtrack which gives a behind the scenes look at Record’s international tours and lifestyle within the music industry. The Soundtrack is the background music to the film. Consisting of 10 tracks that features artist (Miyla J, Trouble Musik). The original music was produced by music producers Justar Bless and Eastwood 365. The Script for the film was written by Tavia Record.

Record has toured Canada and Internationally over his career but only making his debut into the American market with the Under Moonlight Tour; where he performed different cities across the State of Georgia. In 2018 the Under Moonlight release entered the Billboard Top 100 ranking at 75 in the 2017 year end review. Though remaining headquartered in Canada, during the American Leg of his Under Moonlight tour Record opened new doors for his company in Las Vegas, Nevada; to facilitate continuous tours and further business opportunities for those under the Rise Again Entertainment umbrella. Record quotes “I am thankful to God for making all of this possible and thankful for the family and community he placed in my life to support me, and all those I have connected with throughout my career.

Record dedicated Plaques to his hometown’s Brampton City Hall, the Brampton Arts Council, and the Mississauga Central Library.
Gearing up to release his new single and music video “Sweet Talk’N” fans can look for that release by visiting the David Record official website. The Under Moonlight release can also be found on his website where Streaming, downloads and physical copy orders can also be processed.