National Battle of the Bands Drives $12.3 Million Economic Impact for Houston Including Over $100K for Minority Vendors 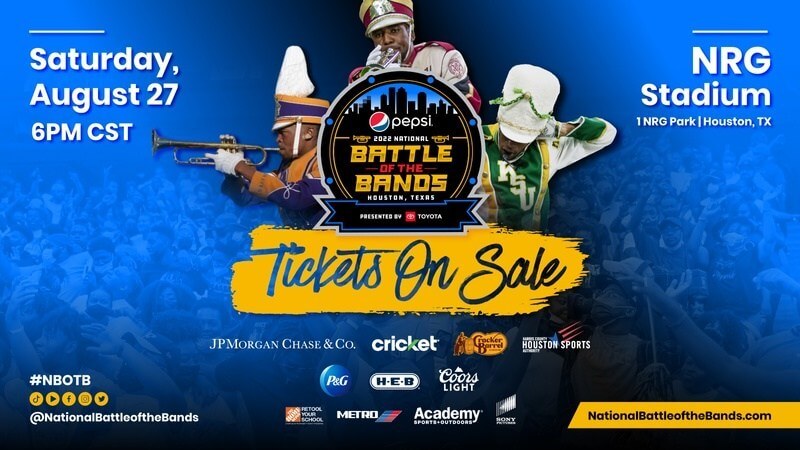 2022 Pepsi National Battle of the Bands presented by Toyota

“The National Battle of the Bands takes great pride in supporting local and minority-owned businesses in the lead up to the competition and during the event,” said Derek Webber, Executive Producer, National Battle of the Bands. “We choose to pour back into the local economy as much as possible by working and partnering with minority business owners. The idea is to empower families to create more opportunities and to help narrow the widening wealth gap in America that disproportionately affects minorities and people of color.”

The Emerging Experience Entrepreneur Conference presented by JP Morgan Chase, one of the NBOTB official events, will take place on Friday, August 26 from 9:00 a.m. – 1:00 p.m. at The Deluxe Theater as part of the NBOTB and JP Morgan Chase’s partnership focused on strengthening the commitment to closing the racial wealth gap by providing more opportunities to minority business owners. National and local bank leaders are coming to 5th Ward to conduct a workshop with community entrepreneurs to learn from, connect with, collaborate, impact, and inspire each other.

According to the U.S. Small Business Administration (SBA), a substantial amount of family wealth lies in business ownership, so business ownership is now considered the “second solution” to building wealth. This is why NBOTB prioritizes contracts with local minority business owners. The goal is to both entertain and enrich the local community.

NBOTB’s mission is to enhance the exposure of Historically Black Colleges and Universities (HBCUs) and their marching bands, the roles they play in educating aspiring musicians, and developing our future leaders. Event organizers have generated more than $700,000 in scholarships for the participating colleges and universities. The competition is an iconic tradition, not only amongst HBCUs, but as a staple in American culture. NBOTB was created to be the nation’s best kick-off to the fall marching band season by showcasing new performances by the country’s top marching bands. It offers unmatched exposure to the marching bands of HBCUs, and has broad appeal among varying age groups and socio-economic demographic groups.

NBOTB will be supporting local minority-owned businesses once again this year in the lead up to the 2022 NBOTB, which takes place on Saturday, August 27 at NRG Stadium.