Nelson Mandela: Lion of Africa has left the stage 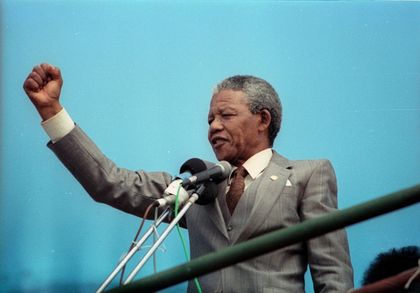 Four simple words that leave the world grieving for a 95-year-old man who went from prisoner to president to peace icon.

Most significantly he led a country to freedom while eschewing violence and any form of retribution.

The son of an African tribal chief, Rolilahla “Nelson” Mandela trained as a lawyer before helping to reinvigorate the African National Congress (ANC). It formed the vocal political opposition to the new Afrikaner government of 1948 and its policy of apartheid.

Mandela’s work and that of his colleagues’ saw him accused of treason.

He was arrested in 1962 and charged with sabotage and conspiracy to overthrow the government by violence. He was tried alongside other anti-apartheid leaders.

Mandela was found guilty and sentenced to life imprisonment.

The South African government eventually freed him on Feb.11, 1990 and his long walk to freedom signified the embodiment of the beginning of the end for apartheid.

The country’s first free and open elections were set down for the end of April 1994.

Mandela made no secret of his plan to run for president and his once banned ANC party would stand representatives in every electorate they could muster a candidate.

He actively preached peace not violence ahead of the crucial vote.

During the last two weeks of April 1994 South Africa was an extraordinary place to be. The world’s press had descended to witness the end of segregation and the first free election in the country’s history was developing into the biggest story news story of the year. Perhaps even the decade.

I know because I was there as a foreign correspondent.

When the first day of voting came on April 26, it turned into a joyous celebration of freedom.

For the original report go to http://www.torontosun.com/2013/12/05/nelson-mandela-lion-of-africa-has-left-the-stage