Tupac Musical Heads To Broadway In 2014

Shakira: Rihanna dream to work with 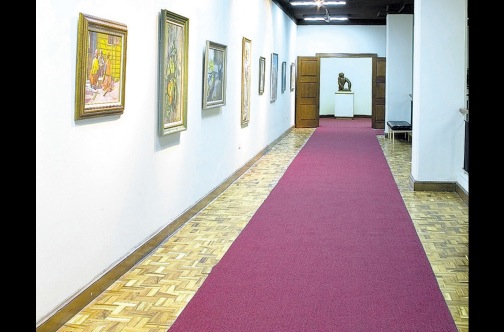 COME January 13, the National Gallery of Jamaica (NGJ) will have a new chief curator. Multi-disciplinary artist, educator, art writer, and environmental activist Charles Campbell has been appointed to the position.

Speaking to the Jamaica Observer, Campbell, who was born in Kingston but moved to Canada at a very early age, noted that he sees great potential for the growth and development of Jamaican art. For him, the strongest asset he brings to the NGJ will be his experience.

“[Through] my combined experience working internationally and in the Caribbean and Jamaica, I’ve got somewhat of an insider’s eye on how the local art world functions, but can also look at it from an international perspective. This makes it easier to see and create opportunities for the gallery and Jamaican art in general,” he said. And what is on Campbell’s agenda once he gets settled in his new job?

“I’m excited by the work that the NGJ has been doing over the past few years, re-examining the collection thematically through its exploration series, highlighting the work of younger generations of artists and paying homage to those who’ve broken ground in the past. You can expect these things to continue,” he explained.

His areas of interest include a greater involvement of artists in the wider Caribbean as well as the Diaspora. He is also looking to launch a project space for artists to develop new and experimental work.

Following a hugely successful staging of the National Biennial in 2012, in which Campbell himself was one of the invited artists, the new chief curator joins the NGJ in another biennial year, and at the start of the gallery’s 40th anniversary.

“The scope of the biennial will continue to expand… we’ll be working to encourage greater participation from these artists as well as inviting artists from across the region to mount special projects. The 40th anniversary is a good opportunity for us to take stock of our achievements and we’re planning a special exhibition to look at how the gallery has progressed and the role it’s played in the development of Jamaican art,” said Campbell.

Turning to the Jamaican art scene, he reiterated the common feeling that these are indeed challenging times for art in Jamaica, but noted that there are interesting changes taking place.

“Younger artists are challenging past generations and being challenged in return. There is a healthy debate going on as to what art is and what art should be. [However], we still lack a lot of good art criticism and the commercial galleries haven’t yet taken advantage of the opportunities that exist internationally for Jamaican art,” he pointed out.

While looking forward to the new position, Campbell acknowledged that even after 40 years there is more to be done at the NGJ.

“There is always more to be done. In the same way that art is continually re-inventing itself, institutions have to follow suit and challenge our own assumptions. This is work that the NGJ has been doing, but it doesn’t end,” he concluded.

For the original report go to http://www.jamaicaobserver.com/entertainment/New-curator-for-National-Gallery_15753723