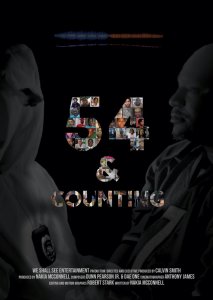 EAST ORANGE, N.J., June 25, 2021 /PRNewswire/ — 54 & Counting produced by We Shall See Entertainment and directed by Calvin Smith is set to release in August 2021. The documentary focuses on Black officer Nakia McConnell’s journey to follow in his father’s footsteps as a police officer to change the system from within. In his journey, he encounters more adversity than success seeing Black people being killed daily by police officers and questions his decision to become a cop. The documentary gives a nuanced insight into the complexities of being a black police officer in New Jersey defending your profession while also advocating for reform.

“I want to tell my story because of my admiration for my dad and our love of law enforcement. I could not sit idly by as systemic racism vilifies my people. I want to encourage other Black and white officers to speak out against injustice and to seek answers on how we can make a change”, said Officer Nakia McConnell.

Police brutality against black people has long been a problem in the United States, and in the past year, with the pandemic and several high-profile deaths of black people, we have seen public outcry to defund the police and hold law enforcers accountable for their actions. 54 & Counting represents the black lives lost by the hands of police officers and told from the lens of a retired black police officer who sought to change the system from the inside.

Check out the trailer for the movie here

Calvin Smith founded We Shall See Entertainment in 2018. The company was formed to make a positive difference in the entertainment industry and sow back into the community.

SOURCE We Shall See Entertainment