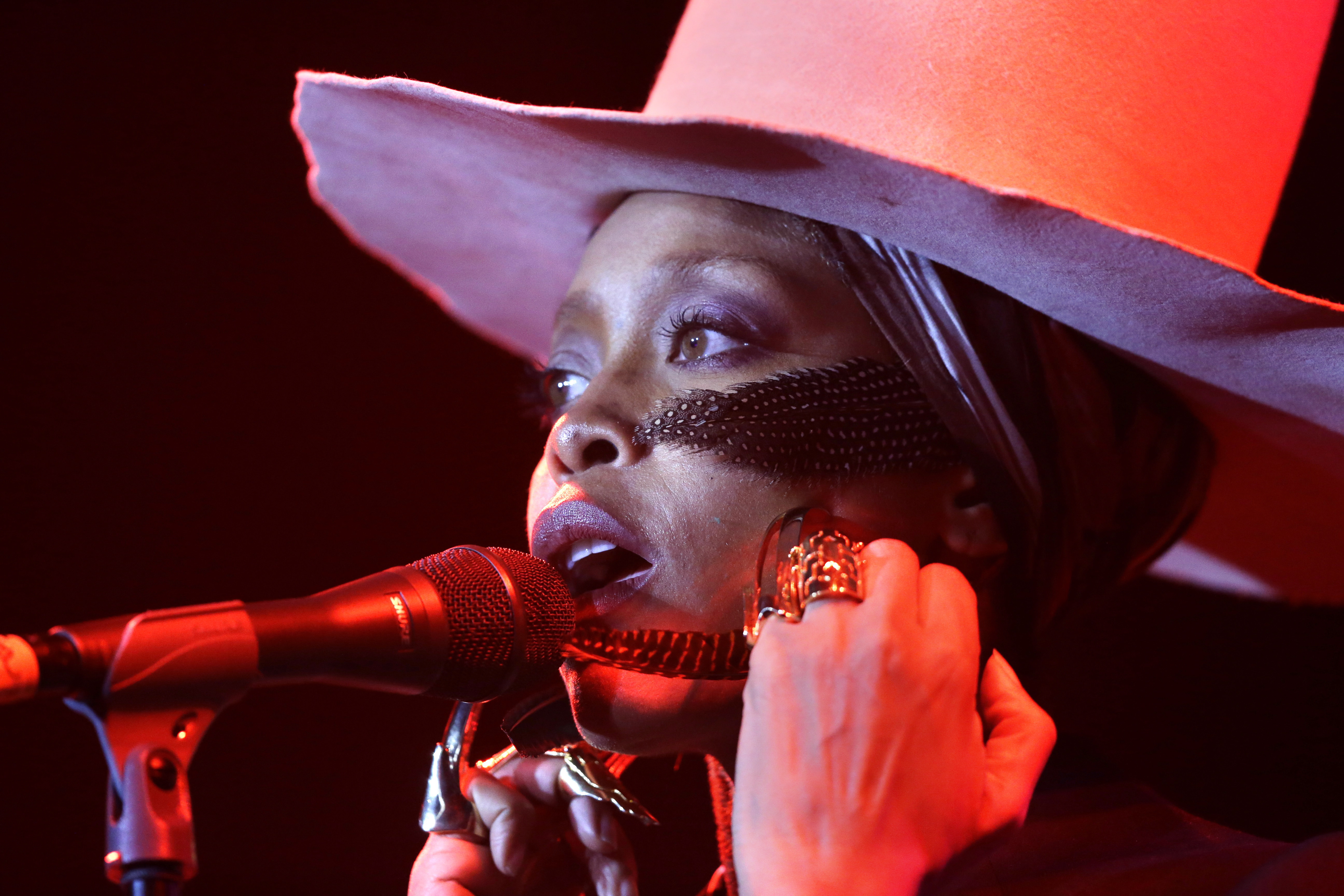 NEW YORK _ Erykah Badu is answering a phone call: her new eyeglasses are ready, and the frames are available for pick-up when she has time.

“I figured you’d probably been busy,” the guy from the optical shop says.

He’s right. Badu hosted the 2015 Soul Train Music Awards earlier this month in Las Vegas, and she’s been doing press ahead of the show’s Sunday premiere on BET and Centric.

“I’ve had this on for about two months,” Badu says of the outfit she’s wearing _ shiny black overalls, sky-high top hat and a chambray button-up with a wooden bowtie that reads “HELLO”). “It was the last thing I had on at Soul Train. (and) I haven’t had a break since then.”

She’s also been sharing material from her upcoming mixtape, “BUT YOU CAINT USE MY PHONE,” titled after a famous line from her equally famous 1997 single, “Tyrone.” It’s set for release Friday.

In an interview with The Associated Press backstage at “The Tonight Show with Jimmy Fallon,” 44-year-old Badu talks about the hosting gig, new music and platinum-selling rapper Drake, whose “Hotline Bling” single she remixed and released in October.

AP: You hosted the Soul Train Music Awards in 1998. How was your experience this year?

Badu: It was really fun. And this time around they made me an associate producer, so I had an opportunity to write my material, which I think is really cool _ to, you know, see my things crystalize _ my words and my sense of humour, which is pretty unique and self-serving.

AP: What made you say yes to the job?

AP: What’s up with the mixtape?

Badu: It’s really, really, really, really awesome. I first did a remake of Drake’s ‘Hotline Bling’ because I thought it was an awesome song. I actually did it for Big Mike’s birthday. Big Mike’s my road manager, tour manager. That’s his favourite song. as well as a lot of other people’s, too. And it came out good. And I just stayed in that studio, in the bedroom, and I just kept writing songs, making songs, writing songs. And about 10 days later, I had this mixtape.

AP: Are there any special guests?

AP: Can you tell us who?

AP: Everyone seems to love Drake _ you included. Why do you think that is?

AP: You do a lot of things _ make music, write comedy, help deliver babies as a doula. How do you stay so ‘unstuck’?

Badu: I don’t know. I just, I guess I don’t judge. You know, that helps you not be stuck. You know, people say hip-hop is dead, and they say soul music is dead and those kind of things, but it won’t die if you allow it to evolve. If you allow its essence to grow inside of the young people_ because they carry it. As they grow, I grow with them.