Obama Answers Rasta Man’s Question On The Legalization Of Marijuana! “How Did I Anticipate ?” 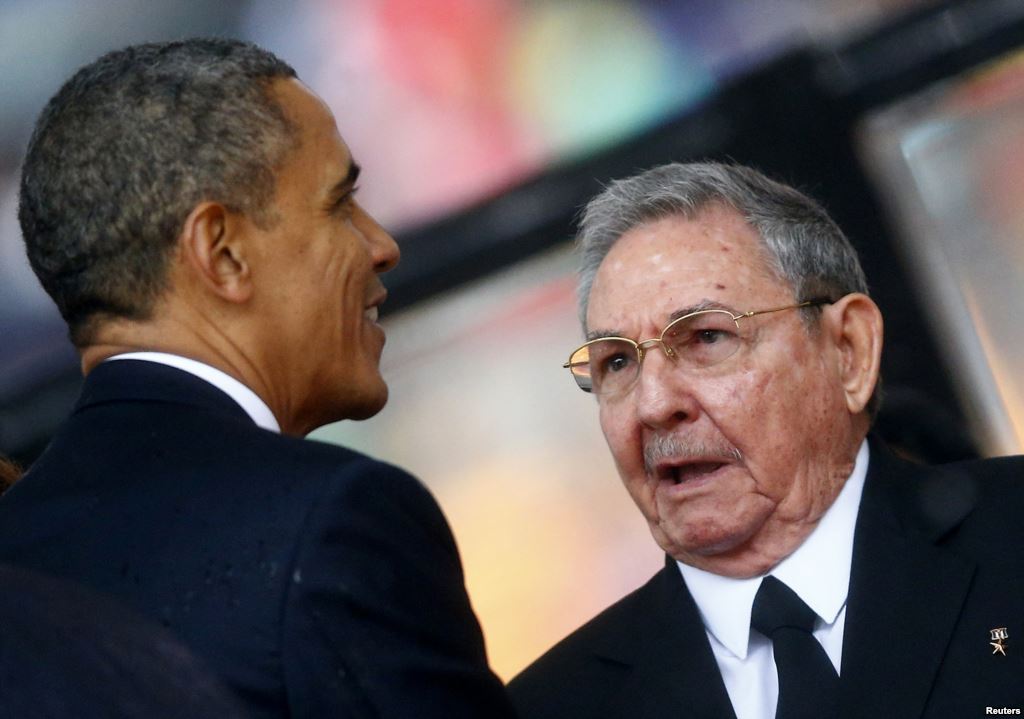 PANAMA CITY _ The presidents of the United States and Cuba have spoken by phone for only the second time in more than 50 years, setting the stage for a historic encounter between the two leaders at a regional summit starting Friday in Panama.

The call between President Barack Obama and Cuban President Raul Castro came on Wednesday, shortly before Obama departed Washington on his trip to Latin America and the Caribbean, the White House said. Both Obama and Castro arrived in Panama City for the Summit of the Americas on Thursday evening, only minutes apart.

The two leaders have been working to restore diplomatic ties, a move that sent shockwaves through Latin America when Obama and Castro announced it in tandem in December.

In another major step on Thursday, the U.S. and Cuba held their highest-level diplomatic meeting since cutting off relations more than half a century ago. U.S. Secretary of State John Kerry and Cuban Foreign Minister Bruno Rodriguez met behind closed doors in Panama City for a session that the State Department described as lengthy and productive.

The flurry of diplomacy was likely to reinvigorate ongoing efforts by the U.S. and Cuba to start their relationship anew after five decades of American presidents either isolating or working to overthrow the government of Fidel Castro or his brother, Raul Castro. Ahead of his arrival in Panama, Obama announced he was close to a decision about removing Cuba from the U.S. list of state sponsors of terrorism, a major impediment to warmer ties as far as Havana is concerned.

The U.S. has long since stopped actively accusing Cuba of supporting terrorism, and Obama has hinted at his willingness to take Cuba off the list ever since he and Castro announced a thaw in relations in December. Yet Obama has stopped short of the formal decision amid indications that the White House was reluctant to grant Cuba’s request until other thorny issues _ such as restrictions on U.S. diplomats in Havana _ were resolved.

“We don’t want to be imprisoned by the past,” Obama said Thursday in Jamaica, the first stop on his trip. “When something doesn’t work for 50 years, you don’t just keep on doing it. You try something new.”

The last known conversation between Obama and Castro was in December, shortly before they announced the thaw in relations. The two leaders exchanged a brief handshake in 2013 during Nelson Mandela‘s funeral in South Africa, but haven’t held any substantive in-person meetings.

Such an encounter was likely to take place either Friday or Saturday during the summit in Panama. Before heading to the gathering, Obama made a quick unannounced stop to tour the Panama Canal that connects the Atlantic and Pacific oceans.

The president, wearing sunglasses with his jacket slung over his shoulder on a cloudy, steamy morning, walked over a pedestrian walkway that spanned the greenish-tinted water below. No ships came through while he was there, apparently for security reasons, although Secret Service gun boats were positioned in the water.

Americans and Cubans alike can recall just how deep the animosity between their countries ran during the Cold War, when even a casual, friendly exchange between their leaders would have been unthinkable. So while Obama and Castro have no formal meetings scheduled together, even a brief handshake or hallway greeting will be scrutinized for signs of whether the two nations are really poised to put their hostile pasts behind them.

Even their arrival Thursday evening seemed steeped in symbolism: Obama, after arriving in Panama City, was whisked via helicopter to his waiting motorcade at an airport former known as Howard Air Force Base, from which the U.S. launched its 1989 invasion of Panama.

While Obama was in Panama on Friday, Copa Airlines and Boeing announced plans for the Panamanian airline to purchase 61 of the U.S. airplane giant’s 737 aircraft in what the companies called the largest commercial deal between a U.S. and Panamanian company in history. Obama and Panamanian President Juan Carlos Varela were to attend the signing ceremony for the deal, the White House said.

Obama was also to meet with other Central American leaders before speaking at a forum of CEOs from the region. Later, Obama planned to join Castro and other leaders for dinner at Panama Viejo, home to archaeological ruins dating to the 1500s. A visit to the Panama Canal was also possible.

Yet the real focus of the summit _ for Obama and most others _ was the highly anticipated interaction between the U.S. and Cuban leaders.

Four months ago, Obama and Castro announced their intention to restore diplomatic relations, beginning a painstaking process that has brought to the surface difficult issues that have long fed in to the U.S.-Cuban estrangement. Hopes of reopening embassies in Havana and Washington before the summit failed to materialize. The U.S. is still pushing Cuba to allow more freedom of movement for its diplomats, while Cuba wants relief from a sanctions regime that only Congress can fully lift.

In a nod to lingering U.S. concerns about human rights and political freedoms, Obama was making a point to attend a forum bringing together both dissidents and members of the Cuban political establishment.