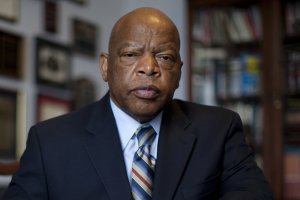 It is with a deep sense of sadness that we report the passing of an icon of the Civil Rights Movement who walked with Martin Luther King Jr. as one of his top disciples.

The rest as they say is history … as for the next 60 years this articulate black activist made an invaluable contribution to the growth and development of black people in the United States of America. John Lewis not only became an activist but he was elected to Congress of the United States of America and for the last 30 years served in that capacity as a well known lawmaker.

He was described as the:

“Conscience of the legislature”

John Lewis died over the weekend. 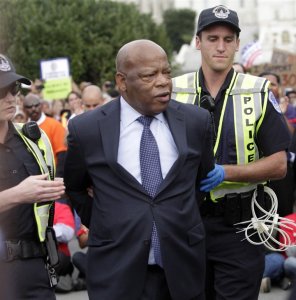 John Lewis was arrested about 45 times by the police. After leading a March of 600 over a bridge in Selma Alabama in a protest for voting rights he had his skull cracked by racist police officers. It was a peaceful March.

John Lewis has gotten many awards, but his greatest accolade that he received while alive was the presidential medal of Honour presented to him by Barack Obama …. the 44th United States President.

A vacuum has been left. The transition is taking place in the form of the BLM movement which has led to several young activists organizing and mobilizing across the world.  Your work will continue Mr. John Lewis.

The most we can say of this departed civil rights leader, legislator and humanitarian, is that you have left indelible footprints on the sands of time. Gone too soon my brother. You came you saw and you did conquered. We honour you today. Rightly so!