PM Hails Alphansus Davis for 31 Years of Service to Education

Prime Minister, the Most Hon. Andrew Holness (left), enjoys a light moment with former principal, Alphansus Davis, at a ceremony for the official renaming of the Spalding High School in Clarendon, Alphansus Davis High, on the school grounds on November 19.

Prime Minister, the Most Hon. Andrew Holness, has lauded retired principal and educator, Alphansus Davis, for 31 years of outstanding contribution to education.

Mr. Holness noted that Mr. Davis, who was appointed as one of his senior advisors in 2007, while he was Education Minister, was instrumental in the transformation of the education system. 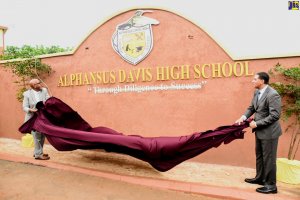 Prime Minister the Most Hon. Andrew Holness (right), and former principal, Alphansus Davis, unveil the sign for the Alphansus Davis High School in Clarendon on November 19. The institution, formerly Spalding High, was renamed in honour of Mr. Davis.

At the time, Mr. Davis was principal of the then Spalding High School in Clarendon, and head of the Association of Principals and Vice Principals.

“I selected him because he understood the system inside and out. He was an advocate and someone who the entire education fraternity respected,” the Prime Minister said.

He was speaking at a ceremony on Tuesday (Nov. 19), for the official renaming of Spalding High, the Alphansus Davis High School.

Mr. Holness noted that as his technical advisor, Mr. Davis was instrumental in the development of the School Safety and Security Manual, aimed at addressing an increase in violence and disorderly conduct in schools.

That was quickly followed by deployment of deans of disciplines to provide pastoral care at institutions.

“The work that Alphansus did was instrumental. In those early years when we started the safety and security programme, we would have a number of incidents.  Now we are managing the education system much better and that is due to the work of Alphansus Davis,” the Prime Minister said.

At Spaulding, Mr. Davis was the driving force behind the construction of 23 new classrooms as well as the administrative block. He was instrumental in the removal of the school from the shift system and provided support to other institutions to eliminate shifts.

The school population also increased under his leadership and is now the place of choice for parents and students. Academic results are good and the school is excelling at sports. 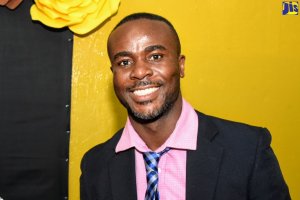 Dr. Courtney Lindsay, a past student of the Spalding High School, paid tribute to former principal Alphansus Davis, at the official ceremony for the renaming of the school in Mr. Davis’ honour on November 19.

Meanwhile, Dr. Courtney Lindsay, a 35-year old past student of the school, who travelled from Barbados for the renaming ceremony, said he could not miss the opportunity to honour his past principal.

In an emotional tribute, Dr. Lindsay said it was Mr. Davis who helped him to transform his life and pursue a path of success.

“I was expelled from a high school at age 17.  I was a thug, getting nowhere fast; I even had a case at juvenile court and had to report to the court once monthly for a year. I totally lost it,” he related.

He said his mother tried to find him a place in another school but due to his record none would accept him except Spalding High.

“I told my boss,  I am taking the time off for this function because there is no way I am missing this because when one principal saw me as a problem to avoid, Mr. Davis saw  a young man who just needed a second chance. 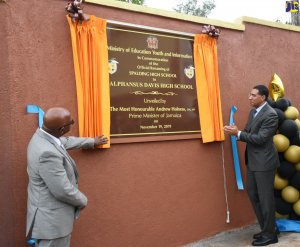 Prime Minister the Most Hon. Andrew Holness (right), applauds after unveiling the plaque commemorating the official renaming of the Spalding High School, Alphansus Davis High. At left is the former principal in whose honour the institution has been renamed. The ceremony was held at the school grounds in Clarendon on November 19.

“Mr. Davis saw a problem that needed fixing and he fixed it,” Dr. Lindsay said, noting that he knew several other students who could say the same thing.

“So, I am here today to say ‘thank you very much Mr. Davis, I love you and appreciate you’,” Dr. Lindsay said.

In his response, Mr. Davis said he is happy to be given this honour while he is still alive. He thanked all the teachers, his family and others, who helped him to achieve success.

“This is a crowning moment for one who rose from humble beginnings, was assessed as a non-achiever and who rose above circumstances to prove the assessors wrong,” he said.

“My wish is that this institution, having been so named in my honour, will stand as a symbol of hope and inspiration to those students, who may have been similarly assessed,” he said.

Mr. Davis expressed the hope that seeing his name on the institution, will inspire students to rise above their challenges to become successful citizens of the country.