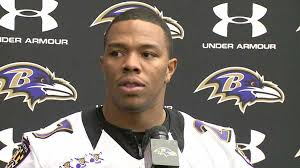 Ray Rice was released by the Baltimore Ravens yesterday and suspended indefinitely by the N-F-L after a video was released showing the star running back hitting his then-fiancee in February. Meanwhile, north of the border, C-F-L commissioner Mark Cohon (COH’-hawn) said in a statement that the league will honour Rice’s suspension. A source told The Canadian Press the C-F-L has informed its teams that Rice can’t be added to any negotiation list and won’t be allowed to sign with a club as a free agent.