“I Will Put My Foot Down … I Am dangerous” Leader of the Opposition and President of the PNP, Portia Simpson Miller Declared 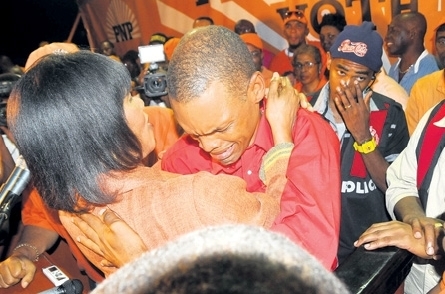 You will recall that Raymond Pryce, a former Deputy General Secretary PNP, was not selected to run the February 25, 2016 General Elections although he was seen as a Portia protege’ and sitting MP who had won his seat comfortably in what is regarded as a safe PNP constituency in St. Elizabeth.

Pryce was talking to noted talk show host Cliff Hughes today on Power 106 FM. Efforts to contact Burke for his reaction has been futile …recording heard.

Contacted by phone this evening at about 4:13 PM, Cliff Hughes confirmed the comments of “Political Assassination” and said the interview would be replayed at 10 PM tonight on POWER 106.

There has been no love lost between Pryce and Burke since the bitter non selection of Pryce.

Stay tuned to Vision for the latest breaking political news in Jamaica. W.I.