State Minister Says Youth Must be Involved in Eradicating Corruption 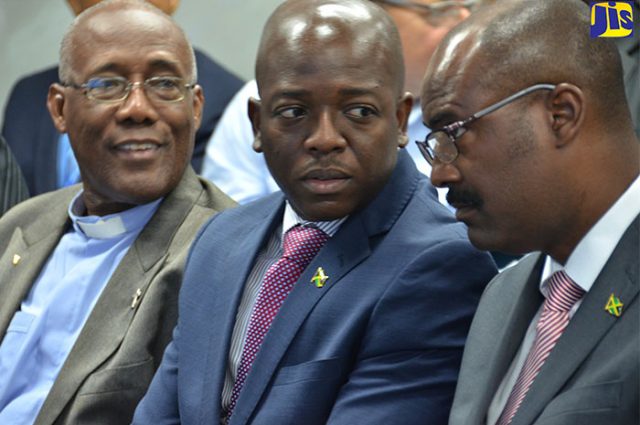 Photo: State Minister in the National Security Ministry, Senator the Hon. Pearnel Charles Jr. (centre), engages Contractor General, Dirk Harrison (right), at the launch of the Youth Anti-Corruption survey findings and Jingle Competition Awards, held at the Office of the Contractor General, on Oxford Road in Kingston, on June 6. At left is Superintendent of the Providence Methodist Circuit, Rev. Dr. George Mulrain.

State Minister in the National Security Ministry, Senator the Hon. Pearnel Charles Jr., says the youth have an important role to play in eradicating corruption in Jamaica and the Caribbean region.

Speaking to JIS News at a ceremony to present the Youth Anti-Corruption survey findings and to award winners of an anti-corruption jingle competition, Senator Charles Jr. said the youth must be integral in developing the strategies to tackle corruption.

“Young people are the most important cohort in the fight against corruption. They must understand their role in developing the kind of society that will uphold transparency and accountability,” he said at the ceremony, which was held at the Office the Contractor General (OCG) on Oxford Road in Kingston, on June 6. It was held under the theme ‘The fight against corruption begins with you’.

He emphasised that since the youth are the “greatest strength and wealth of any nation”, it is imperative that the conversation be had with them “on the perception and reality of corruption”.

Mr. Charles Jr. pointed out that his Ministry will continue to play its part in advocating for a Jamaica in which the citizens understand their role in the accountability, transparency and integrity process.

Commendations were given by the State Minister to the Office of the Contractor General for the innovative ways used to engage youth on the issue of corruption.

He also commended the United Kingdom’s Department for International Development (DFID) for its contribution of £87,000 to support the OCG’s anti-corruption activities.

Meanwhile, Contractor General, Dirk Harrison, said the initiatives out of his office are “sparks to ignite the flame of change”, which needs to be promoted through education, truth, respect and honesty.

“We must change to give our children a fighting chance when we are gone,” he said.

Among the findings of the survey, which was commissioned by the OCG and presented by lecturers Nicola Satchell and Dr. Gavin Daley from the Department of Government, at the Mona Campus of the University of the West Indies, is that some youth have a strong sense of morality and integrity.

Targeting a total of 197 high schools and select primary schools, the survey, which was conducted over a two-week period in late 2016, also revealed that some youth viewed corruption as having a serious impact on Jamaica’s national development. It further revealed serious concerns about truth-telling as well as reporting corruption.