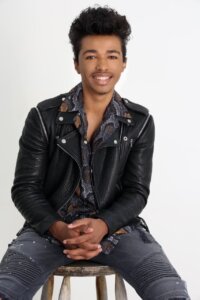 LOS ANGELES, Nov. 28, 2022 /PRNewswire/ — Trace Austin, the grandson of the Temptations’ legendary Otis Williams, has released a new single, “My Story,” which was written by Trace Austin and produced by Byron Dorris, AKA Scotty. Trace recently launched his own 501(c)(3) non-profit organization, Together All Protected, in October to coincide with National Bullying Prevention Month The (TAP) organization will raise awareness about bullying in the community and provide resources such as mental health services, parent support groups, suicide prevention, self-defense classes, creative arts programs for musicians, alternative programs (schools) for minority youth, the LGBT community, and foster children.

Trace was inspired to write “My Story“ after feeling compelled to finally share his story of being a victim of bullying for many years. Trace was bullied, suffered multiple injuries, was home-schooled, and had a school system that failed him. “I want bullied kids to have a voice!” says Trace. “I want a change to happen; I want to inspire others and have them inspire more people to Speak Up!”

To listen My Story, go to: https://distrokid.com/hyperfollow/traceaustin/my-story-feat-Evoni