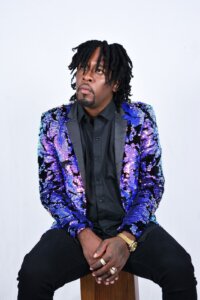 When Unknown Gringo got his musical breakthrough three years ago, he made it his objective to continuously release tracks that would steadily accelerate his career.

He believes that he has struck gold with his Jada Kingdom collaboration, Shy. The single is presented by Desconocido Music, a label that Unknown Gringo launched as a part of his initiative to be actively involved in the business aspects of music.

Shy made its way to digital platforms recently and has already captured the attention of disc jocks as far away as Australia while making its way to China’s Audiomack Weekly 100 chart.

Penned as a conversation between the two singers, Jada Kingdom begins the track expressing that only a few men are able to make an outspoken female feel shy. Unknown Gringo drops lines that he describes as ‘confidence boosters’ after each verse she delivers.

“This track is a sure hit. It has the potential to take over international charts and with the marketing plans I have put in place, I am optimistic that I will continue to see positive results. A lot of females meet a man they like and they feel shy when it’s time to get intimate. So this track is to boost the confidence of the ladies in and out of the bedroom,” said Unknown Gringo.

“One of the other reasons I believe the track is so well received by fans is because of the sultry essence that Jada brings to any project she is a part of. It adds to the overall effect of the song,” he added.

While Shy continues to gain traction, Unknown Gringo said that he already has a follow-up track ready to be released, once he has successfully completed his current campaign.

“I have been in the studio getting exposed to different kinds of sounds and that has been one of the main influences behind most of my recent projects. Based on the energy that Shy has, I already know which track I’ll be releasing next in order to keep the momentum going. My journey has been a learning experience and I am grateful for everyone who continues to contribute to my growth as an artiste and a producer,” he said.

The artiste is also slated to perform at Sting today December 26.