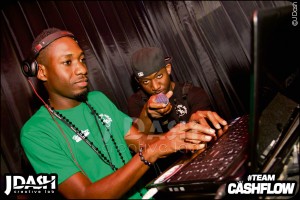 Cashflow Records is a high flying Jamaican label that has produced infectious riddims like: Orange Hill, School Bag and Buss Stop. They have also helped propel the careers of I Octane and Konshens producing many of their chart toppers such as ‘Puff It’ and ‘Realest Song’. When Cashflow produce a riddim, it is one that artists easily gravitate to.
Cashflow Records was founded in 2001 in Cooreville Gardens, a quiet suburban neighbourhood in Kingston, St Andrew, where almost all streets are named after 1960s icons, like: Wailers Terrace, Bob Marley Boulevard, Gaylads Avenue, Sunny Bradshaw Avenue, Paragons Close and Maytals Crescent.
It seems that these giants of Jamaica’s music industry provide the right aura, because what started as a hobby has over time morphed into a fully fledged media enterprise with in-house recording, promotion and video production facilities. Apart from music videos the team comprised of Neil, Xtreme, Kevin Slaughter, Rinse, Nellie Roxx and Father P, even churned out Cashflow Invasion; a TV series on Hype TV, which was aired in 15 Caribbean countries.
Touching down in the UK is the first stop in a string of visits to different countries to seek out local talents.