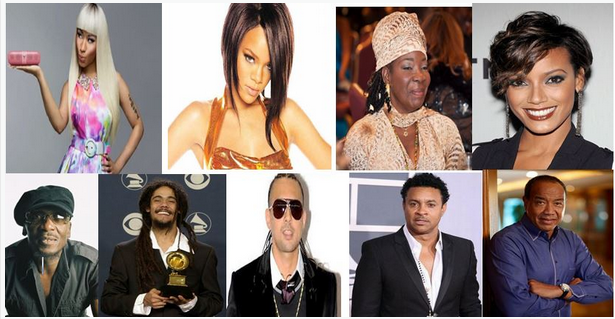 An  interesting list of the Top Ten Richest Celebrities in the Caribbean was brought to my attention, it features artist and popular personalities from all over the Caribbean, I first saw the list on Caribbean E Magazine’s website and thought I would share; The website notes that  ”The list for the richest celebrities’ is based on upfront pay, profit participation, residuals, endorsements and advertising work.”

Selita Ebanks has earned her net worth as a fashion model for Victoria’s Secret and her appearances on various television series, as well as a music video. She has appeared in magazines such as the Sports Illustrated Swimsuit Issue, Vogue, and Glamour.

With a long spanning career, Jimmy has earned his net worth through his many hit singles such as “Wonderful World, Beautiful People,” “Wild World,” “Reggae Night” and more.

Ziggy Marley gained his net worth by being the leader of the band called Ziggy Marley and the Melody Makers. In 2003 he debut his solo album and have since then release four albums.

This Grammy award winner has had a lot of number 1 albums over the year. His most recent album Tomahawk Technique (2012) and Full Frequency (2013) were a success. Sean Paul has a huge fan base mostly in Europe and his concerts are always “sold out”

Rohan Marley – Net worth $20 Million
Profession: Former Athlete / Entrepreneur
Country: Jamaica
Marley the son of Bob Marley surprising did not earn his riches from singing, but from being a line-backer for the University of Miami. He also played professional football in the Canadian Football League with the now defunct Ottawa Rough Riders.
As an Entrepreneur he co-founded Marley Coffee, an organic coffee plantation, which went public in 2011. In January 2012, Marley advertised a new ‘House of Marley’ range of eco-friendly headphones at the Consumer Electronics Show in Las Vegas.

Damian Marley – Net worth $20 Million
Profession: Musician
Country: Jamaica
A certified gold record holder in album sale, Damian has acquired most of his wealth through music and song writing. . Damian Marley comes from a musical family and started building his net worth at the age of 13.

Over the years Shaggy has releases eight albums, three of which went certified Platinum and one was certified Gold.

After winning gold medals and setting records, Bolt is currently rank top 40 of the highest paid Athlete in the world. He makes most of his money through endorsements, appearance fees and sponsor bonuses for record race times. His biggest endorsement deal with Puma pays about $9 million annually. He added multimillion deals with Samsung and Comcast since the London Games. He charges $250-300,000 for track meet appearances.

Minaj is topping the list thanks to income from touring, steady music sales, a lucrative American Idol gig and endorsements with Pepsi and others. She currently has a new clothing line with Kmart.

In 2004, her autobiography “No Woman No Cry: My Life with Bob Marley” was released

The singer continues to rake in the dough, playing over 40 shows during our scoring period and releasing new album Unapologetic, her seventh in seven years.

Michael Lee-Chin has an estimated net worth of $1 billion dollars. He founded the private investment company, Portland Holdings, Inc., and currently serves as the Executive Chairman of AIC Limited in Canada. He is also the Chairman of the National Commercial Bank of Jamaica.

For the original report go to http://islandmix.com/blog/10-richest-celebrities-caribbean/