Protoje Ft. Tessanne Chin – Someone Like You [New Music] 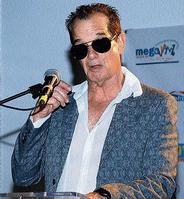 Downsound Records (DSR) has made two major announcements intended to spice up the Jamaican Christmas season this year, musically.

Ninja Man, also a contender, will have the duffle bag of cash live on stage to hand over to the winner.

Bagdonavich, via his company, officially became a full-time partner of Sting, with founder Isaiah Laing last year, after a few years behind the scenes.

The event is dubbed as ‘The greatest one-night show on Earth’.

The track was produced by Bagdonavich and Scatta Burrell and will be marketed by DSR’s marketing arm, Contractor Music.

The label has enjoyed a number of successful collaborations, namely Ishawna and Specialist’s Do For Love andDweet, featuring Ninja Man and Specialist.

Ninja Man was recently victorious in a sound clash against popular radio disc jock GT Taylor at the Irie FM street dance. Ishawna was also engaged in a sound clash at Famous Nightclub for the STAR‘s All-Star Face Off.

Naazir and Don Husky continue to work hard in studio and are set to release new tracks.

For the original report go to http://jamaica-star.com/thestar/20131210/ent/ent4.html