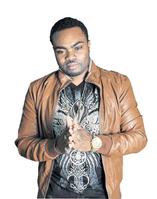 Montego Bay-based reggae-dancehall sensation Rickey Teetz is pleased with the success of his ‘Poverty Life’ single, which jumped to #4 on the CVM Hitlist reggae charts last weekend.

Poverty Life chronicles Rickey Teetz own struggles trying to help raise his brothers and sisters when his father suddenly passed away in 1989.

He, along with the rest of his family, started to move around until they settled in Rose Heights.

In an effort to make ends meet, he entered the hardships of the Charles Gordon Market, selling scandal bags, bag juice, popcorn, bread among other things.

“It was hard growing up, and to be able to make a song about it years later is very gratifying, especially the way the public has responded to it. I have people stopping me in the streets, saying they really feel the song and seeing the struggle inspires them to go on and make it, no matter the odds,” Rickey Teetz said.

Poverty Life was released two months ago on the Win Out Records label. The video is also in rotation on CVM, Hype TV and E Plus.

Later this month, Rickey Teetz will be releasing new singles such as Lighters Up and Walkout.

He is particularly pleased with Lighters Up, a soul-stirring song which anyone who has been bereaved will appreciate.

Teetz lost his mother and stepped in to raise his younger brothers and sisters and financed their education.

However, tragedy struck again, in 2006, when he lost one of his brothers, a stunning loss that crippled him emotionally after the death of his parents.

“The song is for anyone who has lost a loved one. I have my own experiences, having lost my brother plus my father and mother, so this song has a lot of meaning to me. Things have been rough but music got me through everything. music heal me and it keeps me going today,” he said.

Teetz is known for his brilliant wordplay, offbeat metaphors and undeniable swag, which have made him a popular figure out west.

His songs are semi-autobiographical, telling interesting anecdotes about his background and the hardships he had to endure to become the man he is today.

He will be performing on ‘Fyah Fridays’, at Mount Salem Plaza, December 20, and has two events, Cash Money Fish Fry in Rose Heights and Trophy Sniper Birthnight Bash in Coopers Pen, Trelawny, December 21.

For the original report go to http://jamaica-star.com/thestar/20131210/ent/ent7.html