President Obama appeals for ‘peace and calm’ in Ferguson Missouri 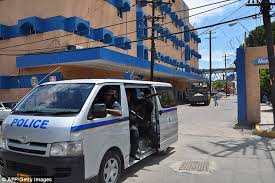 The Associated Press is reporting that six police officers have been suspended in Jamaica amid an investigation into the fatal beating of an inmate.

Authorities say the officers were on duty when 31-year-old Mario Dean was apparently beaten by prisoners in his cell on Aug. 3. He died on Aug. 6.

Police said Tuesday that two inmates have been charged with the killing and that the investigation is ongoing.

The beating occurred in the northwest parish of St. James.