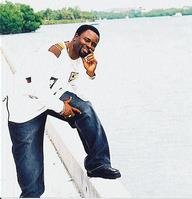 There’s a new single that seems set on the path to the top and it’s coming from Miami-based artiste A-Me-Jah Prophet.

The song, Happy Million Year, is a jazzy, upbeat, infectious single that music lovers will find appealing. It’s the kind of song that once you start listening you can feel your feet moving to the beat.

Born Lester Junior Ingram, A-Me-Jah Prophet says the inspiration behind this breakthrough song came from his reading the books of Daniel and King David’s Psalms.

“I’ve always been motivated spiritually,” he said, adding that the song actually started with a thought.

“In the morning hours of January 1, 2011, I was at work washing up some dishes. I heard my phone messaging going crazy, I knew it was friends and family members calling to wish me Happy New Year. I said to myself, ‘I will check the messages later’, but something prompted me to stop washing the dishes and listen to the messages,” A-Me-Jah Prophet related.

He said after listening his messages something dropped in his spirit and said, “call everyone up and wish them (happy millions) for the year 2011”.

“I said to myself, every year we all wish each other Happy New Year but 2010 there was not much to be happy about. Major financial breakdowns which causes friends and families to fall apart, but through the grace of the Most High some survived it,” he reasoned, adding that we were meant to achieve the greatest, so why settle for less.

The lyrics came into being after weeks of reasoning with Jah, and looking down the line at the path he himself has travelled in life and one friend who inspired him to reach for his dreams – Mickey Mouse, a fresh water fisherman from Free Town, Clarendon.

Born at Fourth Street in Greenwich Town, St Andrew, A-Me-Jah Prophet live, in places such as Waltham Park Road, and Maxfield Avenue, before relocating to Rosewell, Clarendon. His father seemed to be always on the move as he also lived in Free Town, Sandy Bay, Nineteen Mile – all in Clarendon and Planter’s Hall, Banister, Bog Walk, and Cross Road in St Catherine.

Among the schools he attended before migrating were Titson Pen Basic, Rosewell All-Age, Planters Hall All-Age and May Pen Secondary now (May Pen High).

It was a while attending all-age school and participating in school concerts and being a part of the children’s choir at church that he developed a love for music.

In 1986, he migrated to the United States where he got the chance to strengthen his love for music as his mother owned a nightclub at the time. He also voiced on sounds such as Ellis International, Power Force, Love Rock, Slikaz International among others.

In-between holding down a day and night job to support his family the artiste recorded songs such as My Journey, Knowing Jah, Anti-Christ, The Innocent, Exposure, Driving Under The Influence (DUI), Circumstances Of Life, Competition, Black Woman, Music Medication among others.

Most of his songs only enjoyed local airplay in Miami as according to Prophet, “I was doing it for the love of music and not on a professional level.”

This time it’s different though, as he believes Happy MillionYear is a song for the ages and for all people who want to be inspired.

For the original report go to http://jamaica-star.com/thestar/20131230/ent/ent6.html