ARE YOU PREPARED FOR A VERY POWERFUL EARTHQUAKE? 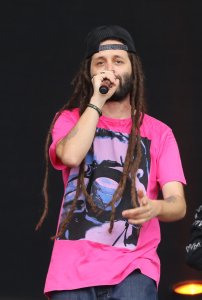 Back-A-Yard Dub showcases Alborosie’s love for the Jamaican remix craft, utilizing the spectrum of vintage gear he has collected over the years, bringing a sound closer to the heyday of Channel One and King Tubby’s than any other modern studio in Jamaica. In fact, the album release follows the release of the digital audio workstation plug-in set, Alborosie Dub Station, a set of digital processors that emulate the gear engineered by the late King Tubby.

“Dub is the alternate universe of reggae, and I love exploring every aspect and detail of my music by making dub mixes,” explains Alborosie. “Having collected original gear and working with King Jammy over the years, I have a new level of appreciation for what the original masters were able to do. The latest journey into my dub catalog is Back-A-Yard Dub, a dub remix of Wailing Souls’ Back-A-Yard. The release of the Alborosie Dub Station plug-in set makes it possible for anyone in the world to use these tools to experiment on their own.”

Alborosie’s reverence for classic analog recording techniques and remix methods have earned him a loyal global fanbase among those eager to hear new reggae reimagined in the classic dub tradition. His attention to detail has also earned him the respect of elders like King Jammy, who worked directly for King Tubby and was instrumental in advancing the dub genre in the 1970s and 80s: “It’s been a pleasure to watch Alborosie progress in his production and mixing skills over the years. He is one of the ultimate students of our music, and I’m proud to have worked with him while he has grown into the culture. Each dub album he puts out is worth listening to.”

Back-A-Yard Dub precedes the release of Alborosie’s forthcoming studio album, For The Culture, set for June 2021 release, on which Wailing Souls are featured in a remake of their 1979 hit “Jah Give Us Life.” Back-A-Yard Dub will be available on all streaming platforms, CD, and vinyl LP, with the beautiful and simple album jacket hand-stamped in the style of classic 1970s minimalist dub album covers. The cover includes a stickered back cover and throwback “Greensleeves Dub Master” labels.