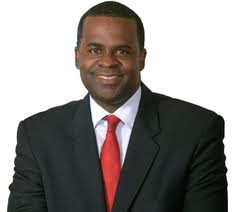 ATLANTA _ Mayor Kasim Reed said Tuesday he has already talked with six potential buyers of the Atlanta Hawks and expects a sale of the team to move quickly after racially charged comments by owner Bruce Levenson and general manager Danny Ferry.

Flanked by Hall of Famer Dominique Wilkins and other city leaders, Reed said the crisis engulfing the NBA team would be solved “the Atlanta way” and predicted the franchise would come out stronger in the end.

The Hawks have come under fire since it was revealed Levenson sent an email two years ago theorizing that many suburban whites would not attend NBA games because of the team’s African-American fans. He agreed to sale his share of the team, but it also emerged that Ferry had disparaged potential free agent signee Luol Deng on a conference call this past summer, saying he “has a little African in him.”

“I have had conversations with no less than six prospective buyers,” Reed said. “All six of those prospective buyers will have to go through a process to be vetted by the NBA. That process is going to occur very quickly.”

He said NBA Commissioner Adam Silver was lining up an investment bank look into the finances of any potential buyer.

In addition, Reed said the city will likely be willing to offer concessions to any new owner to ensure the Hawks commit to remaining in Atlanta for another 30 years. He said there could be as much as $150 million available after the city sells Turner Field, the current home of the Braves, though the mayor said that process has been held up by the baseball team’s refusal to set a definite date for its departure.

The Braves are planning to move to a new stadium in suburban Cobb County in 2017; in fact, it held a groundbreaking ceremony at the site a few hours before the mayor’s news conference. But if there are any delays in completing the stadium, the team has an option in its lease to spend another year at Turner Field.

Reed criticized the Braves and said they are holding up a potential $250 million offer that could transform Turner Field into a 30,000-seat football stadium for Georgia State University, as well as fill in the area around the ballpark with student housing and commercial development.

A Braves spokeswoman said team officials were in a meeting and not immediately available to comment on the mayor’s comments.

With Levenson departing and Ferry on an indefinite leave of absence, Reed said the city would be heavily involved in efforts to sell the team, since it holds the debt on Philips Arena.

Wilkins, a former Hawks star who now serves as a team vice-president and television commentator, said he hopes to be involved with any prospective ownership group.